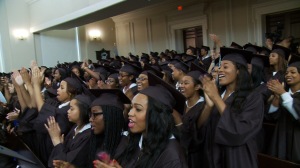 Continuing my spotlight on the second half of the 2014 Sundance US Documentary Competition: Andrew Rossi returns to Sundance with IVORY TOWER, an eye-opening exploration of the high cost of higher education.

IVORY TOWER questions the purpose of higher education in an era when the price of college has increased more than for any other service in the U.S. economy since 1978. While many college graduates struggle to find menial employment waiting tables and cleaning toilets, new student loans over the next 10 years will total $184 billion. Even the once-heroic, tuition-free holdout Cooper Union in New York City now charges students, thanks in large part to hedge fund loans and flashy facilities costing more than $170 million.

Filmmaker Andrew Rossi reveals the moment in history when the United States, long regarded as the epicenter of higher education, embraced a business model promoting property expansion over quality learning. Through interviews with Andrew Delbanco, Anya Kamenetz, and Internet education pioneer Daphne Koller, cofounder of the revolutionary online platform Coursera, IVORY TOWER exposes the instability of traditional college education as it searches the country for alternative forms of cost-effective learning, ranging from concepts of self-governance taught at Deep Springs College in Big Pine, California, to the unofficial hacker houses of northern California.

Some Background:
Rossi has two previous Sundance credits: He produced and directed PAGE ONE: INSIDE THE NEW YORK TIMES, his most recent film, which debuted at Sundance in 2011, and served as associate producer of CONTROL ROOM (2004). Joining him for his latest project as producer is Josh Braun of Submarine Entertainment, who executive produced PAGE ONE and is one of the industry’s most sought after sales agents. Serving as executive producers are CNN Films’ Vinnie Malhotra and Amy Entelis, who have the same roles for fellow 2014 Sundance titles LIFE ITSELF and WHITEY: UNITED STATES V. JAMES J BULGER. Co-producer Kate Novack was also an executive producer on PAGE ONE, while associate producer, cinematographer, and editor Andrew Coffman counts among his editing credits Michael Almereyda’s Sundance 2013 short alum SKINNINGROVE. Among the film’s other editors are Chad Beck, whose previous Sundance projects include Charles Ferguson’s NO END IN SIGHT (2007), Edet Belzberg’s THE RECRUITER (2008), and PAGE ONE; and Christopher Brance (Sundance alums HOT COFFEE (2011) and PAGE ONE).

Why You Should Watch:
Surveying the state of modern higher education is no small feat, but as he did in PAGE ONE, Rossi here tackles fundamental upheaval to a long-standing institutional status quo in a compelling and remarkably concise manner, laying out the past, present, and potential future of America’s economically-strapped universities, and, consequently, their financially drowning students. Exploring diverse but related topics – from the uncertain promise of cost-cutting online courses and the student loan debt crisis, to the Cooper Union student occupation and successful community college teaching approaches – Rossi offers viewers an engaging and thought-provoking overview, and a challenge to universities to return to reinvest in their primary mission of education over all else.

More Info:
For more information, visit the film’s in-progress Facebook page, watch Rossi’s Meet the Artist Sundance video profile, and check out his Indiewire filmmaker interview. For screening dates and times at Sundance, click the link in the first paragraph.