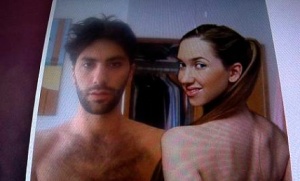 Henry Joost & Ariel Schulman’s debut film was the talk of Sundance this year, with many immediately questioning whether the film was in fact actually wholly a documentary.

It’s hard to say much about CATFISH (whose title I frankly don’t care for, explained incredibly late in the film, but I suppose it adds to the film’s mystique) without spoiling it, so I’m going to go as far as the festival catalogue description did: The film’s charismatic semi-nerdy protag, Nev, a photographer, becomes involved in a long-distance online relationship with Megan, the attractive sister of an eight-year-old painting prodigy, Abby, who had contacted him via MySpace to ask if she could paint one of his photographs. But when Nev and his friends head out to rural Michigan to visit the family in person for the first time, they discover that not everything they knew about the sisters is exactly as it seems.

While I worry that the film has been overhyped, I definitely enjoyed the experience of watching it, and am very curious to see how larger audiences will respond to Rogue’s release.