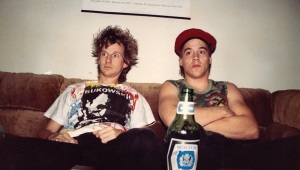 In 1987, Eddie and Mitch, two young punks from the Midwest, moved into a low-rent shithole of an apartment in the Lower Haight district of San Francisco. Through paper-thin walls, they were informally introduced to their middle-aged alcoholic neighbors, Raymond Huffman, a raging homophobe, and Peter Haskett, a flamboyant gay man. Night after night, the boys were treated to and terrorized by a seemingly endless stream of vodka-fueled altercations between the two unlikely roommates. Oftentimes nonsensical and always vitriolic, the diatribes of Peter and Ray were an audio goldmine just begging to be recorded and passed around on the underground tape market. For 18 months, Eddie and Mitch hung a microphone from their kitchen window to chronicle the bizarre and violent relationship between their borderline-insane neighbors.

Not satisfied with simply documenting these outlandish events, director Matthew Bate has concocted a darkly comedic exploration into the blurred boundaries among privacy, art, and exploitation.

Some Background:
Bate makes his feature documentary debut with SHUT UP LITTLE MAN, having previously directed three short docs. As his film details, numerous attempts have been made to bring some narrative version of the Raymond and Peter story to the screen, usually ending in failure.

Why You Should Watch:
Probably not since THE ARISTOCRATS has there been a documentary at Sundance featuring as much foul-mouthed language as comes out of Raymond’s mouth, and despite its political incorrectness, it’s pretty funny due to the context. Beyond that arguably puerile sentiment, what’s truly interesting about the film is Bate’s exploration of viral media pre-Internet and the small network that enabled it to spread, aided by Eddie and Mitch’s initial stance against copyright. On that note, viewers with particular interest in how copyright interacts with creativity will definitely want to see this film.

Screening Info:
For screening dates and times at Sundance, click the link in the first paragraph above. The film also has a funny placeholder website and Facebook page to keep interested audiences aware of upcoming screenings and other developments.