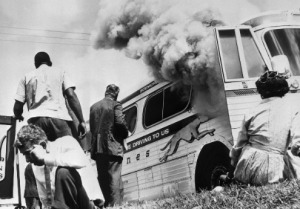 Stanley Nelson’s retelling of a key chapter in the story of the Civil Rights movement had its world premiere at Sundance last year and is now making its broadcast premiere on PBS’ American history focused program, American Experience, which is also making the DVD available.

Seeking to generate awareness of segregation in the American South, more than 400 black and white college students intentionally broke racist laws by traveling together on integrated interstate buses from Washington DC to an intended terminus in New Orleans LA, going through Virginia, North and South Carolina, Georgia, Alabama, and Mississippi along the way. Nelson, speaking to surviving riders, recounts their courageous journey, which captured national headlines when they encountered mob violence in Alabama, necessitating National Guard protection to continue their journey. Ultimately, their struggle managed to get the attention of the President and helped to open the nation’s eyes to prejudice and racism, paving the way for Civil Rights legislation that followed. Nelson’s documentary is compelling and well-constructed, bringing the Freedom Riders’ story back into public consciousness.

2 responses to “On TV/DVD: FREEDOM RIDERS”