2012 Sundance Docs in Focus: MARINA ABRAMOVIC THE ARTIST IS PRESENT 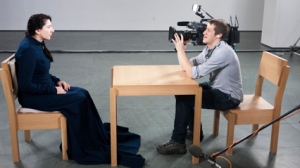 Next up in the 2012 Sundance US Documentary Competition: MARINA ABRAMOVIC THE ARTIST IS PRESENT, Matthew Akers’ in-depth exploration of the acclaimed performance artist and her creative process.

Seductive, fearless, and outrageous, Marina Abramović has been redefining performance art for nearly 40 years. Using her body as a medium, and pushing herself beyond her physical and mental limits, Abramović creates emotionally provocative work that transgresses boundaries and expands consciousness. She is, quite simply, one of the most compelling artists of our time.

With total access granted by Abramović and the Museum of Modern Art, filmmaker Matthew Akers has created a visually luscious and mesmerizing cinematic journey that takes us inside the world of radical performance. Akers brings us close to the curators, collaborators, lovers, and admirers of the artist. The filmmaker also mines Abramović’s creative process and remarkably grants audiences the coveted experience of sitting across from the artist during the most important show of her career. MARINA ABRAMOVIC THE ARTIST IS PRESENT is both an intimate portrait and an experiential encounter with an astonishingly magnetic, endlessly intriguing woman who draws no distinction between life and art.

Some Background:
Abramović is a Sundance alum, having contributed a segment to the erotic/art omnibus project DESTRICTED (2006). Her collaboration with Akers marks his documentary feature directorial debut, but he produced LOCKDOWN, USA, which premiered at Tribeca, and was the cinematographer of previous HBO documentaries including Sundance alum HEIR TO AN EXECUTION (2004) and ELAINE STRITCH: AT LIBERTY. Producer Jeff Dupre is also a Sundance alum – his directorial debut OUT OF THE PAST (1998) won the Documentary Audience Award. Dupre’s producing partner Maro Chermayeff recently directed MANN V. FORD for HBO and is the founder and chair of SVA’s MFA Program in Social Documentary.

Why You Should Watch:
Abramović has been creating her unique form of art since the early 1970s. MoMA’s 2010 retrospective of her work, the basis of Akers’ portrait, proved popular, with her “The Artist is Present” performance of particular interest to curious museum visitors-turned-participants. In revealing what went into that show, and putting himself into the position of those participants, Akers’ doc provides an insight into her work that is both privileged and mediated at the same time.

More Info:
More information may be found on the film’s website and Facebook page. Akers and Dupre discuss their doc in a “Meet the Artists” interview for Sundance here, and Akers speaks to Indiewire here. The doc’s trailer may be found here. For screening dates and times at Sundance, click the link in the first paragraph.