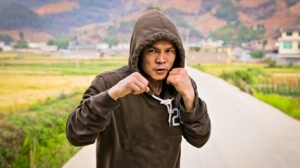 Continuing the rundown of this year’s World Cinema Documentary Competition: CHINA HEAVYWEIGHT, from Canada/China, Yung Chang’s look at contemporary China through the lens of boxing.

In southwestern China, state athletic coaches scour the countryside to recruit poor, rural teenagers who demonstrate a natural ability to throw a good punch. Moved into boxing training centers, these boys and girls undergo a rigorous regimen that grooms them to be China’s next Olympic heroes but also prepares them for life outside the ring. As these young boxers develop, the allure of turning professional for personal gain and glory competes with the main philosophy behind their training—to represent their country. Interconnected with their story is that of their charismatic coach, Qi Moxiang, who—now in his late thirties and determined to win back lost honor—trains for a significant fight.

CHINA HEAVYWEIGHT artfully captures the playfulness among the trainees, their grueling conditioning, and the guiding principle that athletic achievement is for their country, rather than themselves. Director Yung Chang returns to the Sundance Film Festival (UP THE YANGTZE screened in 2008) with an intimately observed film that both explores and reflects social change and development in modern China.

Some Background:
As noted above, Chang’s debut doc brought him to Park City in 2008, and went on to claim multiple awards at various festivals on the circuit. He was also one of the editors on another Sundance standout, LAST TRAIN HOME (2009). Working with him is noted documentary producer Peter Wintonick (MANUFACTURING CONSENT), as well as executive producers Mila Aung-Thwin, Daniel Cross, and Lixin Fan from EyeSteelFilm (LAST TRAIN HOME).

Why You Should Watch:
Documentary fans should always take note of what EyeSteelFilm produces, and Chang proved his storytelling craft with his first film. His new film is beautifully composed and focuses on engaging characters at the beginning and end of their respective careers. Like the best sports docs, the film employs the backdrop of its ostensible primary focus – boxing – to present a subtle commentary on a larger issue – China’s changing society.

More Info:
Check out EyeSteelFilm’s website and the doc’s Facebook page. Chang discusses his doc with Indiewire here. The film’s trailer may be found here. For screening dates and times at Sundance, click the link in the first paragraph.