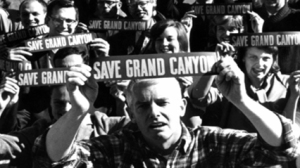 Beginning the second half of the 2012 Documentary Premieres: Mark Kitchell’s expansive chronicle of environmental activism, A FIERCE GREEN FIRE

In the twenty-first century, the idea that we are all connected is almost a cliché, though it is little understood and rarely acted upon. One twentieth-century social movement understood this concept at its core. It is, in the eyes of many, the most important ever: the environmental movement. It seeks nothing less than saving the planet from its most destructive force—humanity.

Inspired by New York Times environmental journalist Philip Shabecoff’s book, director Mark Kitchell returns to the Sundance Film Festival (BERKELEY IN THE SIXTIES won the documentary Audience Award in 1990) with a must-see film, shot and edited over four years, that documents crucial moments in the history of environmental activism. Dramatic personalities and lush archival images—many never seen before—bring pivotal moments to life in five chapters depicting five stories across five decades. Each illustrates the power of activism and commitment at a unique historical moment, often at tremendous personal cost. A film that will inspire and provoke, A FIERCE GREEN FIRE challenges us to rethink our past, our present, and our future on Earth.

Some Background:
As noted above, Kitchell’s first feature documentary on militant campus activism premiered and won at Sundance. BERKELEY IN THE SIXTIES went on to win additional awards at the IDA and from various critics groups, as well as to be nominated for an Academy Award. His first film, the documentary short THE GODFATHER COMES TO SIXTH ST, premiered at Toronto, and featured Francis Ford Coppola. Joining him again as the doc’s executive producer is Marc N Weiss, the founder of PBS’ POV, who also recently produced Barbara Kopple’s GUN FIGHT.

Why You Should Watch:
While it sounds like a tall order to encompass more than half a century of environmental activism history in one film, Kitchell somehow manages to do so in a way that feels comprehensive and vibrant enough to inspire new converts.

More Info:
For more information, visit the film’s website and Facebook page. Its trailer may be found here. For screening dates and times at Sundance, click the link in the first paragraph.

One response to “2012 Sundance Docs in Focus: A FIERCE GREEN FIRE”