In the Works: AMERICAN PROMISE

Parents follow their son and his friend for twelve years to create an in-depth portrait of the experiences of young black males in the education system. 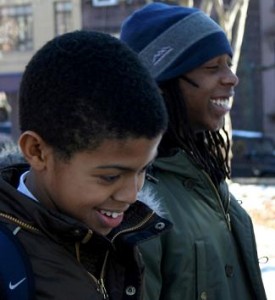 Cognizant of the horrific statistics showing that young black males are more likely to end up in prison than in college, and generally are at a major disadvantage within the educational system, parents Michèle Stephenson and Joe Brewster decided to begin a documentary in 1999 detailing their family’s experience in the NYC school system. Shooting over the course of a dozen years, they have followed their son Idris and his best friend Seun, as well as themselves, from primary through high school, capturing the specific challenges the now young men have faced in the pursuit of learning.

The filmmakers/parents have 18 days to reach their Kickstarter campaign goal of $50,000 to help with post-production costs. At the time of this writing, they’re more than a fifth of the way there, so those interested and able can help them reach their target. Project updates, as well as information about their engagement campaign (including a tool to request a screening) are available on the doc’s website.

I’m a huge fan of longitudinal documentaries – there’s perhaps nothing that shows the dedication of filmmakers to their story (and subjects) than to stick with it over multiple years. Documentary subjects develop over time, showing longterm change, and audiences are given a privileged vantage point that is all but impossible in other media. The subject of Stephenson and Brewster’s film – their own family and son – brings a personal element that’s immediately appealing, while the issue – disparities in the American education system – is one that should be at the forefront of everyone’s consciousness. With a commitment to public broadcast on POV in 2013, this doc will make it out into the world, and has the potential of crossing boundaries of race to engage all parents, students, and educators in a candid discussion about the limits of the academic system as it is now, and what can be done to change it for the better.

Filed under Documentary, Film, In the Works

One response to “In the Works: AMERICAN PROMISE”