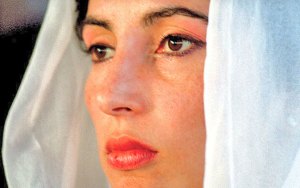 Duane Baughman and Johnny O’Hara premiered their portrait of Benazir Bhutto at Sundance in 2010. It went on to screen at Hot Docs, Stockholm, and a number of other festivals, picking up a special jury prize at the Sonoma International Film Festival.

While the assassinated Pakistani leader and her political family dynasty are at the core of Baughman and O’Hara’s film, their engrossing doc is actually as much about the history of her nation. Taking a comprehensive approach to Bhutto’s life, they present the story of how the daughter of Pakistan’s first democratically elected president – also tragically assassinated – was groomed to continue her father’s legacy, becoming, in the process, one of the most polarizing individuals in the Muslim world, and the first woman in history elected to lead an Islamic nation. Interviews with family and friends at the same time humanize and sanctify her, indicative of her enduring legacy as a national symbol of resistance and hope. While the film perhaps takes on too much and verges at times on hagiography, it nevertheless offers an engaging profile of a complex and fascinating figure.