Wrapping up my thoughts on the Thessaloniki Documentary Festival (part one, covering Greek films may be found here, and part two, looking at international portraits may be found here, while Indiewire articles are here and here), today’s post looks at a surprising number of films dealing primarily with prisons or crime.

THE SAMURAI CASE
The director of the masterful THE GOOD LIFE, Eva Mulvad, was the first filmmaker permitted to shoot inside a Danish courtroom for an entire trial – and what a strange one at that (pictured above). The prosecution and the defense agree that a man was killed with a samurai sword wielded by the defendant during a drunken argument – the defendant is clearly weighed down with the fact that his actions contributed to the death of his best friend – but there are questions around intent. In just under an hour, Mulvad captures a dramatic legal proceeding that determines the ultimate fate of a man who has already judged himself and his life-changing actions. 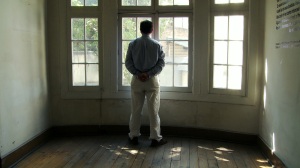 THE YOUNG BUTLER
The titular subject of Jean de Certeau and Marcela Said’s film, Jorgelino, is not shown in court, but, as the film reveals, his testimony there results in numerous convictions against officials in Chilean dictator Pinochet’s regime. As a young man, Jorgelino was in their employ – he may not have directly participated in torture or murder, but he tended to his superiors’ needs, fed their prisoners, and removed their corpses. Called on now to face this past, he provides families of victims with information or confirmation of fears long suspected – though there’s something almost theatrical about the way he does so, ultimately calling into question his motivation.

INTERVIEWS BEFORE EXECUTION: A CHINESE TALK SHOW
Though recent reforms have reduced the number of crimes for which it applies, China employs the death penalty across a wide range of cases. Before prisoners are executed, many give a last interview to journalist Ding Yu and her high-rated weekly television show. Robin Newell follows the sympathetic reporter as she speaks to several prisoners slated to die, exploring the reasons for their crimes, and contemplating the effect being exposed to their stories has had on her. Although the film’s effectiveness is compromised greatly by its use of dubbing and general lackluster TV quality approach, it’s noteworthy for the insight it provides into Chinese law and its system of punishment.

HONK!
Arnaud Gaillard and Florent Vassault’s film is also concerned with the death penalty, but in this case, the French filmmakers explore America’s laws. Looking at cases in Utah, Oklahoma, and Texas, the film sometimes provides details about the crimes, but more often is instead more concerned with the ramifications of the death sentence on families and other survivors. From families of victims waiting to view executions, to the testimony of an exonerated former death row inmate, to the mother of an inmate who honks her car horn when she drives past his prison, the film’s multi-tiered (if somewhat too diffuse) meditation on life and death ultimately points to the ineffectiveness of the death penalty as a deterrent, and to the collateral damage it causes.

AT NIGHT I FLY
Set within California’s New Folsom maximum security prison, Michel Wenzer’s doc focuses on inmates involved in the “Arts in Corrections” program – a creative outlet that brings representatives of disparate and often warring racial groups together to write or perform rather than to hurt or kill one another. Scenes show poetry readings, gospel singing, and intense, truthful discussions between the men, contrasted with their reflections about harsh and isolated prison life, and explorations of the dangerous location through guards’ testimony about illicit weapons and violence. There’s a gritty look and feel to Wenzer’s film, which, while fitting the setting, is perhaps a bit too rough technically at times. Still, the underlying themes of seeking redemption through art make this a worthwhile project.

VISITING ROOM
Acclaimed Romanian director Radu Muntean, together with fellow director Alexandru Baciu, also explore the world of prisoners, but hone in on love instead of art. The subjects are convicts – men and women – who reveal details of how and when they found their partners while behind bars. Directly addressing the camera in stark set ups, they report on first attractions or about the drastic steps they take to spend time with their partners, all the while seeming a but too knowing. There’s a level of performativity or simply showing off at play here – while some subjects make their confessions alone, most are filmed with friends – which actually serves to humanize them, and make them more relatable to a viewer who likely has never had the experience of being incarcerated.

CHILDREN OF THE GULAG
Romain Icard’s film exposes the hidden history of children either born into Stalin’s gulags, or otherwise unbelievably sentenced there a young as three years old due to their families’ supposed counter-revolutionary beliefs. Interviews with a handful of survivors paint a grim picture of years spent forcibly removed from parents, forced to perform hard labor in work camps, and often deliberately starved or otherwise neglected. Their testimony is captivating, helping to make up for the unfortunately pedestrian filmmaking.

HITLER’S CHILDREN
The offspring of another ill-fated group are the subjects of Israeli director Chanoch Ze’Evi’s documentary: the descendants of high-ranking Nazis. Acknowledging their notorious lineage, the men and women featured in the film speak of the difficulty of being indirectly linked to the evils of the Third Reich, and how it has shaped their sense of family and their own sense of self. Some react in the extreme, sterilizing themselves to effectively kill off their rotten roots, while others seek a sense of penance, such as the man who visits a concentration camp and acknowledges his ancestry to a group of visiting Jewish teenagers. Well constructed, the doc asks provocative questions about personal culpability and family legacy.