This post wraps up my coverage of Tribeca documentaries, covering a number of titles from the festival’s Spotlight and Viewpoints sections. Combined with the previous roundups, and films covered at other festivals, I managed to write about thirty-one of the thirty-nine feature docs in this year’s lineup.

SEXY BABY
As signaled by its provocative title, Jill Bauer and Ronna Gradus’ film (pictured above) explores the ever-increasing presence of sex in American culture and its impact on girls and women. Rather than taking a survey approach, the duo instead smartly train their cameras on three different characters, separated by one another by a decade: Twelve-year-old Winnifred, 22-year-old Laura, and 32-year-old Nichole AKA Nakita Kash. Winnifred’s parents are having to remain vigilant as their little girl starts abandoning her interest in dance in favor of male classmates and Lady Gaga-inspired wardrobe, Laura has become so self-conscious of how her body doesn’t match the porn ideal that she’s saved up for expensive labiaplasty surgery, while Nichole struggles to start a family with her husband and live a life after a porn career. Bauer and Gradus present eye-opening material here that’s sure to provoke necessary conversations. That said, I personally feel that having Winnifred as a subject is a misstep. She’s a quintessential privileged NYC kid, far too mature for her own good, and has a writing/acting background – all of these factors makes it seem like she’s playing to the camera, such as the scene where she smart-assedly jokes to her father that she got cab drivers to give her free rides by blowing them. She speaks to the filmmakers’ thesis, but she feels like a ringer; is anyone that surprised Winnie’s so precocious and self-aware? Far more effective, I think, would have been to find a twelve-year-old from a suburban or rural community to see how Facebook, sexting, and the like have had their effect.

MANSOME
Documentary superstar Morgan Spurlock’s newest film also examines gender and culture, albeit in a significantly lighter way. His doc looks at the nature of masculinity as reflected through an increased focus on personal grooming, each explored through individual chapters investigating moustaches, beards, body hair, spa treatments, and the like. Linking these together are recurring segments of executive producers Will Arnett and Jason Bateman being pampered at a day spa while they jokingly reflect on their manliness. Occasional commentary by cultural critics, sociologists, and vox pop help provide some more serious analysis, though it’s often pretty superficial, and, surprisingly, pretty much altogether ignores the white elephant in the room – gayness – perhaps out of a fear of offending some audiences, or, more importantly, making others uncomfortable. As a whole, the film is generally more entertaining than it is revelatory about modern masculinity.

TURN OFF THE LIGHTS
Ivana Mladenovic’s film has much more to say about men – at least about men in the Roma culture. After sharing some final time with fellow prisoners, noting that they followed in their fathers’ footsteps, three young men are released from prison. Initially greeted enthusiastically by family and friends on the outside, they also face the reality of what they’ve lost – one man’s young daughter doesn’t recognize him – and the rediscovery of patterns of behavior that led to their incarceration – misogyny, violence, and a disregard for the law. There’s a rawness to the filmmaking that may not always be pretty, but fittingly captures the recklessness of these men’s lives.

BOOKER’S PLACE: A MISSISSIPPI STORY
Raymond De Felitta’s father was a documentary filmmaker for NBC News in the 1950s and ’60s whose social issues films typically were broadcast once, then vanished. One film on race relations in a small town in Mississippi, however, left an indelible mark on many viewers, notable especially for a remarkable sequence in which a Black waiter named Booker spoke eloquently and candidly about the way he was treated by his customers. After interest in the film is renewed when it is placed online in recent years, De Felitta’s son sets out to learn more about Booker and the aftermath of the broadcast on his life and on the community. This is a great concept, exploring not only the legacy of racism, but also important ethical questions faced by documentarians about how their work affects their subjects. It must be said that the footage of Booker retains its power nearly half a century later – it’s easy to see how his speech became a defining moment exposing racism for audiences. While I’m glad that present-day audiences get to experience Booker’s words through the younger De Felitta’s work, his documentary stumbles in the execution – chiefly due to its distracting, plodding, and ever-present piano score, and the decision to shoot the entire film in black and white, which sometimes results in the unnecessarily confusing conflation of 1965 footage with the present day.

KNUCKLEBALL!
After being surprised by how much I enjoyed last year’s Tribeca baseball documentary CATCHING HELL, I ignored my usual disinterest in sports docs to see this appreciation of the titular unpredictable pitch. Of course, part of my motivation was its powerhouse directorial team, Ricki Stern and Annie Sundberg. They focus the film on the only two Major League pitchers who use the knuckleball – longtime Red Sox Tim Wakefield and neophyte Mets RA Dickey – but also explore the larger fraternity of pitchers who had success with the pitch. Unsurprisingly, the doc is well-made, but even though the two men are affable enough, I never felt very connected to the subject the way I’m sure baseball fans would be, and, in that regard, I think it’s mainly of specialized interest.

TOWN OF RUNNERS
In contrast, Jerry Rothwell’s exploration of the collective Olympic dreams of a small Ethiopian town should resonate beyond running fans. The film zeroes in on two teenage athletic hopefuls, Hawii and Alemi, with Greek chorus commentary on their small home of Bekoji by Biruk, a young boy who works in a kiosk. Over the course of three years, the young women pursue running as a means to have a better life, facing separation from family and the broken promises and less than ideal conditions of their training clubs. Hawii and Alemi are appealing, fleshed out protagonists and could have carried the film alone – although Biruk’s narration signals the passage of time and the encroachment of modern technology to Bekoji, it’s an odd fit with the film’s overall structure and comes off as too deliberate a storytelling conceit. 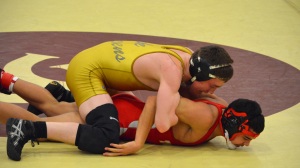 ON THE MAT
One final sports doc wraps up this roundup, this one focused on high school wrestling at Lake Stevens High, the seven-year Washington State Champions. Director Frederic Golding follows the team over an especially dramatic season, accompanied by Lake Stevens team alum, actor Chris Pratt (PARKS AND RECREATION), who functions as narrator and on-screen host. In addition to the demanding but sympathetic coach, a handful of athletes are profiled, including the talented but rebellious Steven; the dyslexic, likable Jesse; the confident rich kid Eric; and the troubled Mormon Jack; and the stakes are laid out – will bad attitudes, bad grades, or bad injuries cost this team the championship? While Golding explores some of the especially grueling aspects of the sport – such as the torturous practice of cutting weight to qualify for a desired weight class through strict caloric restriction and exercise – and the kids are appealing enough, the film is fairly by-the-numbers sports team doc, showing the value of teamwork and perseverance, and Pratt’s presence and clunky, melodramatic over-narration are absolutely unnecessary. Still, the film obviously connected with its audience, picking up the Best Feature Award in the festival’s online competition.