On VOD: WALK AWAY RENEE 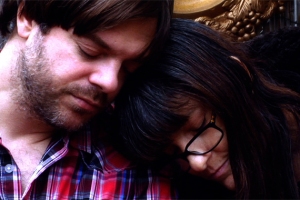 Jonathan Caouette’s follow up to TARNATION made its world premiere at last year’s Cannes. Since then, that original version of the film screened at Moscow, Poland’s New Horizons, and a number of other festivals. After reworking the film, Caouette screened the current, revised version at BAMcinemaFest and Outfest, and it’s this version that made its VOD premiere in late June.

Caouette’s first film also had somewhat of a similar origin – originally debuting in late 2003 at NYC’s experimental LGBT fest, MIX in a three-hour version that included some sci-fi elements, Caouette edited the film dramatically in time to officially premiere the new version at the 2004 Sundance Film Festival, removing the fictional elements. While I haven’t seen the original version of his latest film, my understanding is that it too included some more fantastical, fictional elements that have largely been excised in the new version. Like TARNATION, the new film is focused on Caouette and his relationship with his mother, Renee LeBlanc, a schizophrenic for whom he’s functioned as a caretaker for several years. Less experimental and poetic than the first film, but still very much poignant, Caouette’s follow up shows a filmmaker who is more mature and perhaps more inured to the realities of dealing with the mental illness that plagues his mother and the impact it has on his life. The film follows Jonathan as he travels with Renee from Texas to New York, having decided to transition her to an assisted-living facility closer to his home. Beyond the road trip aspect, which results in its own share of drama when Renee loses the meds that keep her on the precarious side of stable, the film also fills in viewers on the time between the end of TARNATION and the present film. This includes Jonathan’s son Joshua moving in with his dad and his partner David, soon followed by both Renee and her father, Adolph Davis – a living situation that clearly couldn’t have been easy for anyone. Caouette has received criticism in the past for focusing his work on his mother’s compromised state, but it would seem unavoidable that this should be included as the content of his filmmaking – her condition, and that of his unusual and difficult upbringing had, and continues to have, a profound affect on his life. That he is able to process and transform these challenges through his films is a testament to the power of creativity and art.