Last week’s post on Toronto docs covered my thoughts on THE ACT OF KILLING, CAMP 14, THE CENTRAL PARK FIVE, FIRST COMES LOVE, FREE ANGELA & ALL POLITICAL PRISONERS, THE GIRL FROM THE SOUTH, THE LAST WHITE KNIGHT, ROMAN POLANSKI: ODD MAN OUT, and SHEPARD & DARK. This round-up wraps up my Toronto coverage with a look at nine more titles.

LOVE, MARILYN
Half a century after her premature death, Marilyn Monroe still manages to captivate filmmakers and other performers, as revealed in Oscar-nominee Liz Garbus’ new documentary (pictured above) based on Monroe’s recently unearthed letters, diaries, and notebooks. This new material emphasizes just how much Monroe’s dumb blonde screen persona was just that – a carefully constructed alter ego that both made her career yet also proved an obstacle to being taken completely serious. Garbus makes the unusual decision to have well-known actors recite Monroe’s words – while the likes of Glenn Close or Lindsay Lohan aren’t exactly trying to be Marilyn, they lend an element of performance in the way the enact her words which gives the project a unique feel while in some way personalizing and visualizing written material. Other actors like Ben Foster and Adrien Brody similarly enact writings about Monroe by Normal Mailer and others. Supplementing this technique are a treasure trove of rare outtakes and home movies which offer further intimate insight into Monroe’s struggles both personal and professional.

FAR OUT ISN’T FAR ENOUGH: THE TOMI UNGERER STORY
Artist Tomi Ungerer may not be as iconic as Marilyn, but beginning in the late 1950s, his children’s books were among the most distinctive and popular – that is, until he is essentially blacklisted from the business due to his more adult-oriented projects. Director Brad Bernstein offers an appreciative, nearly hagiographic, portrait of Ungerer, now living a quieter life in Ireland, and his extensive body of work, which still looks radically different than other examples from kids’ books. Much is made of the artist’s upbringing in the contested Alsace region of France, and Ungerer’s traumatic memories of the Nazi occupation; it’s interesting insofar as it helps inform the development of his craft and some of the themes reflected in his work, but the film generates more interest when it’s instead focused on how he shook up the overly safe children’s book world of the mid-20th Century with unusual subjects that had been deemed taboo – like a story focusing on a friendly snake. Even more intriguing are his forays into political protest design – while this perhaps didn’t generate the controversy that his later erotica did, there’s a power to the dark images he created that begs further exploration.

MEA MAXIMA CULPA: SILENCE IN THE HOUSE OF GOD
Academy Award winner Alex Gibney explores a serious controversy involving children that shockingly goes back much further than the mainstream media’s coverage would suggest – pedophilia in the Catholic Church, and, more telling, its coverup. Framing the film around the first recorded instance when victims attempted to seek redress – the case of young boys in a Wisconsin school for the deaf – Gibney expands his search for answers to encompass other stories of abuse and to determine who knew what – leading straight to the Vatican. That these earliest reported victims, deaf boys in the 1950s, seem to have been specifically singled out because they were amongst the most vulnerable – many were chosen because they had hearing parents who didn’t know sign language, so the boys couldn’t easily communicate the abuse to them – lends emotional weight to the ASL testimony of the now-grown men, finally able to share their stories with the world. The larger story Gibney reveals is even more disturbing, making it absolutely clear that the Church and its highest leaders have been more concerned about maintaining its own reputation than about protecting children. Already a hot-button issue, the controversy should see renewed attention – and hopefully true reform – thanks to this documentary.

NO PLACE ON EARTH
Another secret history is unearthed in Janet Tobias’ stranger than fiction story of Ukrainian Jews who were able to escape certain death by living underground during WWII. As explained by an American spelunker, Chris Nicola, he found traces of human occupation while exploring a labyrinth of caves in the post-Soviet Ukraine, and heard vague stories from locals about Jews hiding from the Nazis, but it took him years to track down the survivors and learn the truth: Nearly forty people managed to evade capture over the course of a year and half to emerge in safety after the Russians beat back the Germans. A handful of still-living survivors share their experience, illustrated through extensive re-enactments that make up the majority of the film (and which I’ve already offered my take on here). It’s a surprising story – a testament to the survival instinct and the strength of family – made all the more affecting near the end of the film when the survivors return to the caves with their grandchildren, sharing the legacy of their remarkable feat with the next generation.

THE LEBANESE ROCKET SOCIETY
Directors Joana Hadjithomas and Khalil Joreige are also invested in exploring legacies – in this case, honoring the short-lived and forgotten episode of the Lebanese space program. Chancing across an image of a rocket test launch from the ’60s program based at Beirut’s Haigazian University, the filmmakers set out to discover what happened to the titular program and why no one seems to remember it. Tracking down one of its chief architects, they relate a story of scientific wonder that at first seemed to energize national pride only to fall victim to geopolitical realities in an often unstable region. Inspired, the filmmakers set out to reclaim this lost history, constructing a sculpture that comes with its own potential security headaches, and imagine an alternate, utopian reality where the program had successfully continued. As a whole the historical elements of the story are the most compelling. The filmmakers’ onscreen dominance in the middle section, as they publicize the story and deal with the minutiae of constructing the sculpture, less so – though it’s understandable given their goal, and there is a decided impact felt from the image of a rocket-shaped sculpture making its way through the roads of Beirut. The utopian imagining is intriguing, if a bit overextended – but as a whole, the film succeeds in presenting a different, and little-covered, side of Arab history. 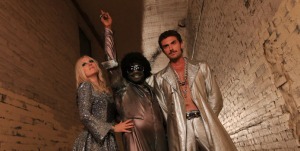 THE SECRET DISCO REVOLUTION
Continuing a mini-theme, another “secret” history is explored in Jamie Kastner’s tongue-in-cheek look at the subversive, revolutionary elements of disco. Far from being simply a popular dance genre marked by a level of hedonism and drug use, Kastner argues that the era also reflected the mainstreaming of three recently liberated marginalized groups – women, African-Americans, and gay men. I appreciate many elements of Kastner’s film: the history he provides is comprehensive and engrossing, laying out how disco broke conventional rules to claim its dominant spot, and serves as a reminder that despite the backlash that has apparently permanently tainted the genre, its popularity spread far and wide and it was outrageously lucrative for a number of years; the title design is fun; and even the over-the-top narrator is initially a nice touch. Where the film falls flat for me are in the too-often used faux re-enactments of “disco’s masterminds,” and the undercutting Kastner applies to his own thesis – virtually every interviewee, when asked to reflect on the transgressive aspects of disco, immediately dismisses the idea. While this is meant to be cute – they’re “unwitting” revolutionaries – some scenes come off as very forced, such as a painful, extended disavowal of gay innuendo in Village People songs by the current line-up of the group. As a result, the doc doesn’t feel satisfying as a whole.

HOW TO MAKE MONEY SELLING DRUGS
Satire is employed to better effect in Matthew Cooke’s slick look at the global drug trade, produced by Adrien Grenier. Presented as a mock-educational video game and helpful how-to guide in a depressed economy, this subversive film lays out the steps needed to succeed in the drug game – moving from the lowest level pot dealer to the highest level cartel head. Along the way, former dealers, law enforcement officials, invested celebrities, and key players in the drug trade weigh in, offering personal accounts of their own interactions on both sides of the law. A clear provocation intended to win over viewers to contemplate the failed war on drugs and the accompanying rise of the prison system, Cooke’s snarky but always engaging film is successful in grabbing the audience’s attention via both form and content, and, perhaps, spurring them on to action. 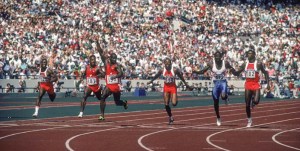 9.79*
Daniel Gordon’s contribution to ESPN’s 30 for 30 series also looks at drugs – in this case the controversy around the use of performance-enhancing steroids that stripped Canadian runner Ben Johnson of his 1988 Olympic gold medal won for the titular record time in the 100-meter sprint. Noted as perhaps the biggest Olympic scandal to date, the controversy resulted in an international dialogue around steroid use and drug testing for athletic competitions. Gordon revisits the case, interviewing not only Johnson and his chief rival, American Carl Lewis, but the other runners at the contested race, as well as coaches and others behind-the-scenes. While some of the men remain cagey about the own use of steroids, others are more upfront, revealing the prevalence of performance enhancers and calling into question how and when they’re policed – including at the 1988 games. If the film is conventional for the most part, it’s nevertheless well-constructed and offers multiple perspectives on one of the most infamous sports controversies of the past few decades.

MORE THAN HONEY
Finally, Oscar-nominated director Markus Imhoof presents his expansive take on the significance of the honeybee in his stunningly photographed new documentary. As signaled by the title, the film takes pains to emphasize the important role bees play in nature – a subject that has been at the heart of many recent documentaries focusing on the disturbing phenomenon of colony collapse disorder, such as Toronto’s own COLONY from 2009. Imhoof doesn’t constrain his film to the latter topic, however, opening up other issues, including the harm large scale, mechanical beekeeping may have on the insect and the emergence of stronger African bee colonies that are proving more resilient than the traditional European variety. At times it feels like the film is covering too much – Imhoof’s own familial connection to beekeeping is brought up early but isn’t particularly developed, for example – but there’s an undeniable beauty captured in the film, anthropomorphizing the creature and providing remarkable access to its hives.