2013 Sundance Docs in Focus: INEQUALITY FOR ALL 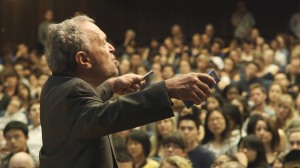 Next up in the 2013 Sundance US Documentary Competition: Jacob Kornbluth’s INEQUALITY FOR ALL, in which former US Secretary of Labor Robert Reich explains the reasons for the widening gap between America’s 1% and the rest of us.

In lectures, books, and years of commentary, former labor secretary and current UC Berkeley Professor Robert Reich has argued passionately that widening income inequality poses one of the most severe threats to our economy and our democracy.

Filmmaker Jacob Kornbluth, inspired by Reich’s book Aftershock, tackles this massive topic by effectively adapting Reich himself into documentary form. Asking how we got here and what happens if we don’t act, they dissect countless issues—among them wage stagnation, consolidated wealth, manufacturing, financial instruments, capital markets, globalization, and election politics—with an uncanny ability to render complex principles digestible. In addition to interviews with other economists, politicians, and experts, Kornbluth documents the struggles of regular working people for whom the American dream is increasingly untenable.

In this AN INCONVENIENT TRUTH for the economy, Reich presents a compelling, intellectually rigorous narrative bolstered by abundant research and graphics. In upholding rational inquiry over ideological prisms, he encourages us (as he does his students) not to share his opinion, but to challenge our own assumptions.

Some Background:
This is Kornbluth’s first documentary and his third time at Sundance, after the fiction films HAIKU TUNNEL (2001) and THE BEST THIEF IN THE WORLD (2004). His producers, Jennifer Chaiken and Sebastian Dungan of 72 Productions, also have US Dramatic Competition title AFTERNOON DELIGHT in the festival this year. Chaiken has also produced a number of Sundance alum, including MY FLESH AND BLOOD (2003), FAMILY NAME (1997), and I LOVE YOU, DON’T TOUCH ME! (1997). Robert Reich served in the Ford and Carter administrations before taking the Labor post under Clinton. Besides teaching at Berkeley, Reich is a regular political commentator on various news outlets and the author of more than a dozen books.

Why You Should Watch:
The affable Reich serves as an ideal guide through the hot button issue of income inequality. While being among the best-informed about the issue, he’s also disarmingly almost self-deprecating at times, humanizing him from what could be a strictly didactic role. Rather than feeling drowned by the information Reich presents, the viewer will find a refreshing clarity that may very well motivate them into taking action to reverse the course the nation has taken since the Reagan administration. Together with fellow US Documentary Competition title CITIZEN KOCH, Kornbluth’s film asks us to take stock of where America is now and what its people want for its future.

More Info:
For more information on the project, check out its website and Facebook page. For Kornbluth’s thoughts on the film, check out his Indiewire interview. For screening dates and times at Sundance, click the link in the first paragraph.