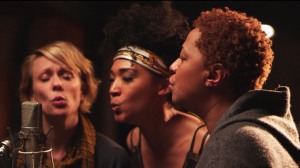 Wrapping up today’s profiles is the penultimate film in the 2013 Sundance US Documentary Competition: Morgan Neville’s TWENTY FEET FROM STARDOM, a celebration of music’s largely unheralded backup singers.

What would a pop song be without the riffs, refrains, and harmonies of its backup vocalists? Although these singers are usually relegated to the margins, and few, if any, become household names, their work has defined countless songs that remain in our hearts and collective consciousness. TWENTY FEET FROM STARDOM juxtaposes interviews with industry legends (Bruce Springsteen, Bette Midler, and others) and the relative unknowns who support them like Darlene Love, Merry Clayton, Lisa Fischer, and Judith Hill as they illuminate the art of melding their own distinct voices with lead vocals and reveal their desires for careers as solo artists.

TWENTY FEET FROM STARDOM traces the backup singers’ history—from those Phil Spector–produced pop tunes and soul-inspired British Explosion acts (Joe Cocker, the Rolling Stones) of the 1960s, to their reversal of fortune when the recording industry changed in the 1990s, and into today. Filmmaker Morgan Neville’s unprecedented look at the moving personal journeys of these normally uncelebrated artists pays tribute to their indelible role in popular music.

Some Background:
Neville is regarded as one of non-fiction’s premier music and arts documentarians, having received multiple Grammy nominations and won an Emmy Award. Through his Tremolo Productions, he has directed and/or produced a series of projects on musicians and music producers for both television and theatrical outlets, on subjects ranging from The Rolling Stones to Wayne White, Pearl Jam to Ray Charles. He is a Sundance alum with his doc on LA’s singer-songwriter scene of the 1970s, TROUBADOURS (2011). Joining him as producers on his newest film are Gil Friesen, who was an executive producer on THE BREAKFAST CLUB and BETTER OFF DEAD; and Caitrin Rogers, who previously co-produced Sundance alum THE TILLMAN STORY (2010).

Why You Should Watch:
Screening as one of this year’s Day One films, Neville’s infectious ode to the unsung heroes of popular music is sure to be a crowdpleaser. GIving talents like Darlene Love the spotlight they deserve, the film will win them new appreciation and respect, while posing stimulating questions about the psychology of being a star vs being in the chorus. At the same time, the doc is an elegy of sorts to the way music used to be recorded in a different era – making it a fine companion piece to fellow class of 2013 music titles MUSCLE SHOALS and SOUND CITY.

More Info:
For more information, check out the film’s Facebook page and Tremolo Productions’ website. For Neville’s thoughts on the film, check out his Meet the Artists profile for Sundance and Indiewire interview. For screening dates and times at Sundance, click the link in the first paragraph.