I returned from the 10th anniversary True/False late Sunday night, sadly skipping out on the final day of the festival due to other obligations, and it’s telling as to how much fun I had in Columbia MO that I’ve spent a fairly large chunk of time since then catching up on sleep. It’s been said before, but it bears repeating – this event knows how to stand out in the crowded festival landscape by embracing a sense of celebration and whimsy. From its participatory March March through the center of the small college town, to its truly enjoyable game show event, Gimme Truth, True/False leaves an impression. Throw in genuinely friendly locals, a wildly eclectic group of buskers performing before each screening, and the low-key involvement of a seemingly evergrowing and unexpected assortment of industry colleagues as filmmaker mentors (“swamis”) or film moderators (“ringleaders”), and this festival becomes one that anyone who’s ever attended wants to return to immediately. What follows are brief thoughts on a handful of the films I haven’t previously written about that screened at the festival, all of which notably have an especial concern with their settings. Absent from the list are reactions to the hush hush “Secret Screenings” – you’ll just have to go to Columbia to experience next year’s crop yourself.

THE EXPEDITION TO THE END OF THE WORLD
Filmmaker Daniel Dencik accompanies a motley crew of scientists and artists to Greenland’s ice fjord to explore the otherworldly terrain and its animal inhabitants, and to uniquely convey a sense of the impact of climate change. Despite the inherent seriousness of their mission, this is far from a dry activist doc. Dencik and his subjects inject a sense of the absurdly comic, from riffs of a discordant Metallica song at various points, to existential considerations of the transience of mankind’s dominion over the Earth. Between this unexpected tone, beautiful and at times troubling shots of the not always ice-covered landscape, and near encounters with a hungry polar bear, the film (pictured above) offers an unforgettable and singular experience of an almost mythical, and endangered, part of the world.

NORTHERN LIGHT
Michigan’s Upper Peninsula, the setting for Nick Bentgen’s directorial debut, is in many ways also as important as its characters. Over multiple seasons, the film follows a number of families for whom snowmobile racing is the glue that keeps them and their communities together. Against the backdrop of the Great Recession, this distinctly regional pastime serves as a distraction, a means to potentially make some money in trying times, and the source of personal pride. But Bentgen hasn’t simply crafted a film about racing – it’s about small town life. If the gorgeously shot film is perhaps somewhat overlong, it just about gets away with it – there’s arguably more to be gleaned about his main subjects, Walt and Isaac, through their intimately shot family dinner conversations than from the drive they show on the track during the annual endurance race that forms the centerpiece of the doc.

THE GARDEN OF EDEN
Ran Tal’s portrait of Israel’s popular Sakhne National Park artfully weaves sound and image together to immerse the viewer in various individuals’ experience of their setting. Profiling a diverse assortment of visitors over four seasons, Tal trains his camera on their enjoyment of the park’s activities, from swimming to sunbathing to barbecuing, while their voiceover candidly reflects on love, life, politics, and belonging. But even in this picture postcard setting, there’s often an underlying sense of conflict reflective of the region – early coded references to a concern with how many “cousins” are in attendance later come to a more explicit head in a brief sequence with park officials discussing changing the image of the park as one that caters to Palestinians in order to attract a larger and more desirable crowd. 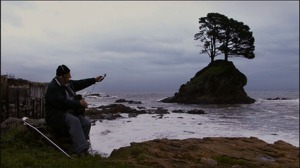 THE LAST STATION
A Chilean nursing home reveals our relationship to the disconcerting truth of mortality in Cristian Soto and Catalina Vergara’s expert observational film. Turning their cameras on a number of the residents – including a man who diligently updates his address book as he verifies who is still among the living, and another whose somber radio broadcasts reveal which residents have passed away when he’s not playing his amateur recordings of lake and mountain soundscapes – the filmmakers confront the viewers with the reality of our twilight years. Though not maudlin, the images demonstrate a sense of isolation – subjects note more than once the increasing rarity of family visits and the feeling of being abandoned to slowly pass away out of sight – and in so doing provide an indictment of our own fears and avoidance of death.

THESE BIRDS WALK
While Soto and Vergara’s film is set in a place for those nearing the end of their lives, directors Omar Mullick and Bassam Tariq’s is instead about a home for Pakistani boys just at the beginning of theirs. Sponsored by a beloved philanthropist, the Edhi Foundation has set up a halfway home for runaways, a sanctuary for the boys to in some small way recuperate from the incidents that have led them to flee their often difficult lives before they inevitably ask to return to their families, despite the hardships they will continue to face. Mullick and Tariq achieve a remarkably intimate vantage point as they follow a few boys at the home as well as the Edhi’s driver, who must navigate the sometimes dangerous road to deliver his charges and confront the families that allowed their children to run away. While a smaller, quieter film, it creeps up on you, achieving a transcendent quality that makes it feel almost timeless.

THE INSTITUTE
Finally, San Francisco, or, perhaps more accurately, San Francisco’s shadow world, is the site of filmmaker Spencer McCall’s playful investigation. A stranger than fiction story of a conspiracy-riddled experiential game played out in the back alleys, tunnels, office buildings, and graffiti of the Bay Area, the film reveals the truth(?) behind the Jejune Institute’s Games of Nonchalance. Interviewing the game’s designers and its former players – some seemingly still stuck in the experience, others more wistful that it’s over – McCall invites the viewer into the joys of discovery and play, where, for a brief time, the familiar streets of the city gave way to a secret world, if one accepted the challenge and opened his or her eyes to the wonder. Mirroring the game, and quite fittingly for True/False, the film deliberately incorporates obviously fictional elements in its recounting, and doesn’t wholly answer every question it poses, allowing the audience, in some small way, to approximate the experience of Nonchalance from the relative safety of their theatre seats.