In Theatres & On DVD/VOD: G-DOG 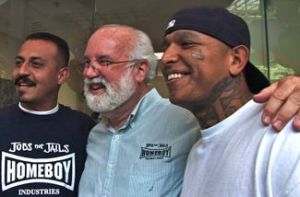 Coming to theatres via Cinedigm’s Docurama initiative and to DVD and VOD tomorrow, Tuesday, April 23: G-DOG

Freida Mock’s portrait of a changemaking Jesuit priest made its world premiere at Hot Docs last year. It went on to screen at the Los Angeles Film Festival, Aspen, and toured US embassies around the world via the US State Department’s cultural diplomacy program. The film is part of Cinedigm’s new seven-film program bringing feature documentaries to theatres weekly in up to fifteen US markets, including NYC, LA, Pasadena, Encino, San Diego, Palm Desert, Austin, San Antonio, Phoenix, Cleveland, Columbus, Pittsburgh, Hartford, New Haven, Ithaca, Richmond, and Helena. The films are also available for additional theatrical-on-demand screenings via Tugg. In NYC, Cinema Village will screen the doc this Tuesday, Thursday, and Saturday.

Jesuit priest Father Greg Boyle, respectfully referred to by his titular nickname, is the focus of Mock’s inspirational film, which follows the efforts of his LA-based Homeboy Industries to provide an alternative to gang life. Led by Boyle’s practical philosophy that “nothing stops a bullet like a job,” Homeboy combines educational and vocational opportunities with counseling, tattoo removal, and the fostering of self-worth to interrupt the cycle of gang membership and violence and to end the demonization of gang members in favor of humanizing and genuinely rehabilitating them into society. While it has proven itself to be the most successful gang intervention program in the country, the Recession threatens to put an end to the good work Boyle and his surrogate family of colleagues have done. Mock spends a year at Homeboy, telling not only Boyle’s story, but also those of many of the former gang members who have taken on leadership positions, and the impact on them of Homeboy’s uncertain future. Though the film explores Boyle and Homeboy’s once-controversial past, it’s in broad strokes – a bit more depth here would have helped to balance the present day focus which at times nears dangerously close to an institutional show and tell. That said, Mock successfully captures her main subject’s determination, his knack for disarmingly funny storytelling, and the clear love and respect he has for his charges that has literally saved their lives.