In Theatres: DOIN’ IT IN THE PARK: PICK-UP BASKETBALL, NYC 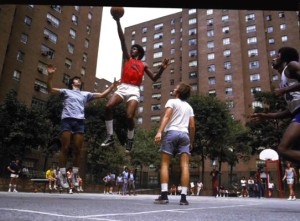 Coming to the Maysles Cinema today, Wednesday, May 22: DOIN’ IT IN THE PARK: PICK-UP BASKETBALL, NYC

Kevin Couliau and Bobbito Garcia’s tribute to outdoor court basketball made its world premiere at the San Francisco Black Film Festival. It went on to screen at Urbanworld, Philadelphia Awesome Festival, New Jersey, and Toronto’s Regent Park, picking up awards at several. After its week run at the Maysles, the film will expand to other venues in NYC and around the country via Tugg.

Expressing a deep love not only for basketball but for the specific culture of New York City’s playgrounds, Garcia and Couliau’s film takes an expansive look at the lasting influence street ball has had on players and the game itself. In many ways, the doc is a guided tour of the city’s park courts and, most effectively, its legendary players – not only men who made it to the NBA, but old school street players like Pee Wee Kirkland and Kid Sundance Davis. Interviews from these men and others convey a clear sense of the positive impact of their experiences on the court, in addition to often very funny anecdotes about the unwritten set of rules unique to each park, and limited but effective archival footage of court play, complete with amazing period fashion. This sense of living history manages to elevate the film from its very unfocused, meandering survey structure – its weakest aspect. Still, despite this looseness, fans of the game will find plenty to like, and even non-fans should respond to this look at street-level cultural history.