Wrapping up my overdue coverage on September’s Toronto International Film Festival nonfiction programming, this post looks at the docs I was able to see from the fest’s Wavelengths, Mavericks, and Contemporary World Cinema sections.

MANAKAMANA
Stephanie Spray and Pacho Velez’s film (pictured above), one of the most formally daring docs in the festival, appears appropriately enough in TIFF’s experimentally-tinged Wavelengths section. A production of Harvard’s Sensory Ethnography Lab, overseen by LEVIATHAN’s Lucien Castaing-Taylor and Verena Paravel, the deceptively simple concept here is the documentation of the experience of a cable car ride to and from a sacred Hindu temple. Over the course of the nearly two-hour film, the gondola carries the viewer on eleven distinct trips of about eleven-minutes each – half going up the mountain to the eponymous temple, the other half returning. The filmmakers hold their camera in a fixed position to capture the reactions of the passengers across from them. Some sit stoically, carrying elaborate offerings, others are tourists less interested in the spiritual aspects of the journey than in the view, and still others are non-human passengers – roosters and goats on their way to be sacrificed. The standout segment belongs to two women eating melting ice cream – a gleeful, magical sequence. Ancient ways meet modernity, West encounters East, and the viewer is immersed in the experience, never sure who will accompany them on the ride next.

THE MISSING PICTURE
Also screening in the same section is Cambodian Rithy Panh’s personal chronicle of life under the Khmer Rouge, which previously was the grand prize winner of Cannes Un Certain Regard. As signaled by the film’s title, images from the period of Pol Pot’s brutal regime are incomplete – extant footage is state-sanctioned propaganda that suppressed the harsh reality facing the populace, such as the forced labor camp Panh and his family endured. As a corrective, the director employs crude but distinctive clay figurines in elaborate dioramas to re-enact his memories, related in voiceover, detailing life before and after the genocidal Khmer Rouge laid waste to their nation. This approach to memoir, while creatively addressing a visual absence, nevertheless proves somewhat distancing, with Panh lost behind two separate layers of representation – first, the stylized figurines, and second, the narration, which while co-written by the director, is voiced by someone else. Still, despite this detachment, the film is able to uniquely convey a place and time that’s already been the subject of numerous films.

BARBARIC LAND (PAYS BARBARE)
Another project exploring the actions of a cruel leader, Yervant Gianikian and Angela Ricci Lucchi’s avant-garde documentary focuses on Italy’s invasion of Ethiopia under Mussolini’s rule.The film’s title denotes both nations, the colonial power attempting to defeat what they considered a savage territory, while their actions, as dissected here, serve instead to indict their own inhumanity. Manipulating archival footage of disturbing scenes in various ways – playing with speed, color, and legibility, while also overlaying a haunting soundtrack – the filmmakers reflect on the relativity of truth in the colonial era, when such gruesome footage was originally little more than propaganda heralding the European nation’s military strength. Though just over an hour, Gianikian and Ricci Lucchi’s thoughtfully composed project makes for a challenging experience that won’t sit well with all viwers. 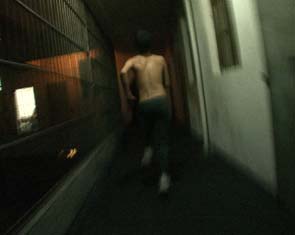 ‘TIL MADNESS DO US PART
That said, docs don’t get much more challenging than the final Wavelengths title caught at TIFF, Wang Bing’s nearly four-hour-long observational study of a Chinese mental institution. Dropping the audience in the thick of it, essentially making them fellow inmates in the asylum, the film roams the halls and rooms of the hospital, home to 100 men, which in its grittiness and squalor looks more like a 19th century prison than anything close to a medical facility. While some of the men are briefly identified, very little context is provided aside from their length of stay – for some, longer than a decade. While Wang’s simple act of bearing witness to these conditions serves as a tacit criticism of a broken, unfeeling system – both of the specifics of the hospital and of the larger government that enables it – the film’s unrelenting, punishing nature is sure to lose more viewers than first sit down to experience it.

STOP THE POUNDING HEART
Despite screening in the Contemporary World Cinema section, the hybrid approach taken in Roberto Minervini’s rural Texas-set study could easily have placed it in the fest’s experimental section. The third of three films placing real people in semi-fictionalized versions of their own life, Minervini’s latest focuses on Sara, the eldest daughter of a sheltered family of spartan, devout Christians who has an arranged marriage in her future. Enter neighbor Colby, a rough-and-tumble amateur rodeo rider, and, well, not much happens, to be honest. They strike up a friendship, and there’s the barest whiff of attraction, but between Minervini’s minimalism and Sara’s deep reticence, the viewer could blink and miss it. Still, there’s something intriguing about the portrait created of a very particular kind of rustic, distinctly anachronistic, God-fearing clan – I just don’t find the confusion raised by the hybrid treatment to add anything particularly worthwhile to the proceedings.

FOR NO GOOD REASON
Moving over to the Mavericks strand takes us to this far more conventional profile of illustrator Ralph Steadman, best-known as Hunter S Thompson’s artistic collaborator. Structured around an artist studio visit by famous friend Johnny Depp, who took on the legendary gonzo journalist in FEAR AND LOATHING IN LAS VEGAS, the film delivers what a viewer would expect from a portrait on Steadman: countless anecdotes about working with Thompson, numerous examples of his kinetic, grotesque work, including an engaging look at his process from blank page to completed piece, and little else. It’s perfectly watchable, and fans of both Thompson and Steadman will appreciate it, but there’s nothing extraordinary about either the subject or the filmmaking that makes it unforgettable.

OUR MAN IN TEHRAN
Also fairly formulaic in its approach is Larry Weinstein and Drew Taylor’s very Canadian treatment of the true story that inspired Oscar winner ARGO. Seeking to set the record straight on the significant role Canada, and several Canadians, actually played in the now familiar tale of Americans in hiding at the dawn of the Iranian revolution, the film offers a straight-forward recount of “the Canadian Caper,” and, as indicated by its title, focuses on ambassador Ken Taylor. Despite not mentioning that Ben Affleck-directed Hollywood blockbuster, the film’s very existence is entirely in response to it, making this feel like a workmanlike, and perfectly fine, curiosity piece meant just for the pride of Canadian viewers, more than an essential documentary on the subject that could resonate with larger audiences.

INREALLIFE
Finally, both Mavericks and this festival coverage wraps with noted British director Beeban Kidron’s alarmist piece on the encroachment of the Internet on our everyday lives. If this far too wide-ranging work has a focused message, it’s something like: “Lock up your sons and daughters! The Internet is poisoning our teenagers!” While Kidron brings up some valid, if hardly original, points about our overdependence on technology, the erosion of privacy, the enabling of bullying due to the net’s anonymity, and the ubiquity of porn (that this is presented as automatically only a bad thing is also problematic), it’s all done in a shockingly reactionary manner – as if this is the first time the director has heard of the web. Aside from references to more recent social media, the viewer wouldn’t be surprised if this turned out to be from the mid-1990s rather than today, responding with moral panic at the latest technological development rather than engaging in a more nuanced exploration.