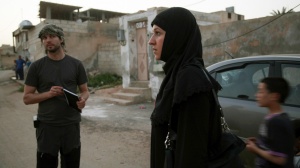 Returning to my 2014 Sundance profiles, the next US Documentary Competition title: Katy Chevigny and Ross Kauffman’s E-TEAM, following the investigators of human rights violations around the world.

When atrocities are committed in countries held hostage by ruthless dictators, Human Rights Watch sends in the E-TEAM (Emergencies Team), a collection of fiercely intelligent individuals hired to document war crimes and report them to the rest of the world. Within this volatile climate, filmmakers Ross Kauffman (BORN INTO BROTHELS) and Katy Chevigny (ELECTION DAY, DEADLINE) take us to the frontline in Syria and Libya, where shrapnel, bullet holes, and unmarked graves provide mounting evidence of coordinated attacks conducted by Bashar al-Assad and the now-deceased Muammar Gaddafi. The crimes are rampant, random, and often undocumented, making E-Team’s effort to get information out of the country and into the hands of media outlets and criminal courts all the more necessary.

In this breathtakingly documented film, Chevigny and Kauffman, like their intrepid subjects, risk their lives to expose crimes committed by some of the world’s cruelest despots.

Some Background:
Chevigny and Kauffman are Sundance alums – both debuted films as directors/producers at the fest in 2004 – DEADLINE and BORN INTO BROTHELS, respectively. Chevigny also previously produced the Sundance alum NUYORICAN DREAM (2000). Kauffman’s BROTHELS (directed together with Zana Briski) picked up the Sundance Documentary Audience Award upon its debut, and went on to win the Best Documentary Feature Oscar, Best Documentary Emmy, an Independent Spirit Award, and several other awards. Producer Marilyn Ness is a past Sundance Documentary Film Grant recipient as producer for Johanna Hamilton’s upcoming UNTITLED 1971, and counts among her other producing credits several documentaries for PBS in collaboration with Ric Burns. The film’s editor, David Teague, is also a Sundance alum, having cut Cynthia Wade’s shorts FREEHELD (2007, Oscar winner) and BORN SWEET (2010, Sundance jury honorable mention), and Zachary Heinzerling’s CUTIE AND THE BOXER (2013, Sundance Documentary Directing Award, Oscar shortlisted).

Why You Should Watch:
Given the dangerous nature of the Emergency Team’s work, the HRW has never before permitted an outside filmmaking team to accompany them on their investigations. Chevigny and Kauffman’s chronicle of their subjects’ on-the-ground work captures the risks of challenging the authority of seemingly untouchable regimes in pursuit of justice, with nailbiting scenes viscerally demonstrating the real threats they face. The filmmakers have selected compelling subjects, including couple Anna and Ole, Fred, and Peter, whose past histories in areas like the former Yugoslavia and the USSR feed their determination to put an end to dictatorial impunity and provide a clever and expansive way to contextualize and underscore the high stakes of their present missions.

More Info:
For more information, visit the doc’s Facebook page and join the mailing list on the in-progress website. Check out Chevigny and Kauffman’s Meet the Artist Sundance video profile and Indiewire filmmaker interview. For screening dates and times at Sundance, click the link in the first paragraph.