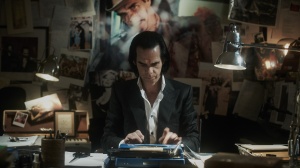 Expanding beyond the US, the 2014 World Cinema Documentary Competition kicks off with Iain Forsyth and Jane Pollard’s 20,000 DAYS ON EARTH, from the UK, a hybrid portrait of singer/songwriter Nick Cave.

Nick Cave has long been one of the most fascinating and enigmatic figures in the music and film world. 20,000 DAYS ON EARTH enhances his mystique.

This innovative drama/documentary features Cave as both subject and coconspirator, intimately documenting his artistic process and combining it with a fictional staged narrative of his 20,000th day on Earth. As a result, the film also explores the creative spirit.

The film weaves two parallel narrative threads. The first is a cinematic portrait of Cave’s 20,000th day, created through a series of staged, but not scripted, scenes and encounters. The second looks in depth at his creativity — from writing through recording and rehearsal to performance.

This unique blend of documentary essay and cinematic fiction demonstrates the connection between Cave and the filmmakers, visual artists Iain Forsyth and Jane Pollard; all three are illuminating the search for truth through artifice and myth. Ultimately, 20,000 DAYS ON EARTH reaches beyond Cave to ask all of us how many days we’ve been alive and what use we’ve made of that time.

Some Background:
British artists Forsyth and Pollard met and began collaborating in art school, focusing their practice on artifice, such as their 1998 live show “A Rock ‘N’ Roll Suicide,” which meticulously recreated David Bowie’s farewell performance as Ziggy Stardust, exactly 25 years later, or their shift to video-based work, such as 2003’s FILE UNDER SACRED MUSIC, which restaged the notorious bootleg video of The Cramps performing at the Napa Mental Institute in 1978. Their relationship with Nick Cave & The Bad Seeds began in 2008 when they directed videos for several of the band’s singles, and continued with DO YOU LOVE ME LIKE I LOVE YOU, a series of fourteen short films commissioned to accompany the re-issue of the band’s quarter century of work, and their production and sound direction of a 3D audiobook of Cave’s 2009 novel, THE DEATH OF BUNNY MUNRO. That same year, they produced the 3D video installation RADIO MANIA: AN ABANDONED WORK, commissioned by the BFI Southbank Gallery. This marks their first feature project. Their subject, Nick Cave, who provides the original score together with Warren Ellis, is himself a Sundance alum as the screenwriter of John Hillcoat’s THE PROPOSITION (2006), and actor in Tom DiCillio’s JOHNNY SUEDE (1992) and in Michael Haussman’s RHINOCEROS HUNTING IN BUDAPEST (1997). Producers are James Wilson, a Sundance alum as co-executive producer of BUFFALO SOLDIERS (2003) and IT’S ALL ABOUT LOVE (2003), and producer or executive producer of such notable films as SHAUN OF THE DEAD, THE LOVELY BONES, and ATTACK THE BLOCK; and Dan Bowen, who has produced several concert docs featuring Katy Perry, Take That, and Mumford & Sons. Executive producers include Film4’s Anna Higgs, a Sundance alum as producer of Eva Weber’s short STEEL HOMES (2009); former Channel 4 commissioning editor and new head of the Sundance Institute Documentary Film Program Tabitha Jackson, whose Sundance executive producer credits include SINS OF MY FATHER (2010) and THE IMPOSTER (2012); Hani Farsi, philanthropist and CEO of the Corniche Group, who also executive produced Sundance alum THE IMPERIALISTS ARE STILL ALIVE! (2010); Pulse Films’ Thomas Benski and Luis Ochoa, Sundance alums as producers of WHO IS DAYANI CRISTAL? (2013) and SHUT UP AND PLAY THE HITS (2012); and Phoebe Greenberg and Penny Mancuso, executive producers of Sundance short alum ALL FLOWERS IN TIME (2011) by Jonathan Caouette. The film’s editor, Jonathan Amos, also counts Sundance alum IN FEAR (2013) among his credits, while the cinematographer, Erik Wilson, also shot fellow 2014 Sundance title THE DOUBLE, as well as alums THE IMPOSTER, TYRANNOSAUR (2011), and SUBMARINE (2010).

Why You Should Watch:
As signaled by Forsyth and Pollard’s background, this is hardly a conventional musician profile. While fans are offered a privileged look at Cave as he creates, the would-be day-in-the-life elements that the duo have set up play with the mythology of celebrity, inspired by Jean-Luc Godard’s SYMPATHY FOR THE DEVIL and Peter Clifton and Joe Massot’s LED ZEPPELIN: THE SONG REMAINS THE SAME. Unscripted, these pseudo-fictional sequences allow Cave to, in essence, act as himself, or as how “Nick Cave” should behave, aided at times by past collaborators Kylie Minogue and Ray Winstone.

More Info:
For more information, visit the film’s Facebook page and sign up for the mailing list on the project’s website. As they become available, I’ll also link to Forsyth and Pollard’s Meet the Artist Sundance video profile and to their Indiewire filmmaker interview. For screening dates and times at Sundance, click the link in the first paragraph.