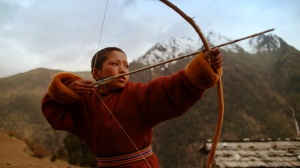 Continuing my spotlight on this year’s World Cinema Documentary Competition with the first of three films that debuted at IDFA this past Fall: From France/Finland, HAPPINESS, Thomas Balmès’ illuminating look at the advent of modernity in a Bhutanese village.

In 1999, King Jigme Wangchuck approved the use of television and Internet throughout the largely undeveloped nation of Bhutan, assuring the masses that rapid development was synonymous with the “gross national happiness” of his country, a term he himself coined. Director Thomas Balmès’s film HAPPINESS begins at the end of this process as Laya, the last remaining village tucked away within the Himalayan kingdom, becomes enmeshed in roads, electricity, and cable television. Through the eyes of an eight-year-old monk impatient with prayer and eager to acquire a TV set, we witness the seeds of this seismic shift sprouting during a three-day journey from the outskirts of Laya to the thriving capital of Thimphu. It is here the young boy discovers cars, toilets, colorful club lights, and countless other elements of modern life for the first time.

Balmès illuminates the seduction of technology—as well as its rapid encroachment—on an ancient way of life with an observant eye, reminding us how complicated and bittersweet the effects of progress can be.

Some Background:
Balmès is best known for his 2010 documentary, BABIES, distributed by Focus Features, which is one of the top 25 highest grossing docs of all time. His career spans more than two decades, with films covering a diverse range of topics: UN peacekeepers in Bosnia, mad cow disease in India, the conversion of Papua New Guineans to Christianity, ethical factory conditions in a global marketplace, and personal injury compensation. Joining him as producers are Making Movies’ Kaarle Aho and Quark Films’ Juliette Guigon and Patrick Winocour.

Why You Should Watch:
Taking a quiet observational approach, Balmès’ film draws viewers into the regular rhythms of life in mountainside Laya, an agrarian village which has been waiting for electricity for fifteen years. Young Peyangki, himself in transition, having just been dropped off at the monastery by his mother for lack of funds to otherwise secure his education, makes for a perfect point of identification for the changes coming to his home. With moments of welcome humor to balance out occasionally troubling signs of the unfortunate human costs of rapid development – here embodied by Peyangki’s older sister – Balmès deliberately paced chronicle of changing times offers viewers in the industrialized world pause for thought.

More Info:
There is no standalone website for the film yet, but funder ITVS has set up a page, while more information about Balmès and his work may be found at his website. As they become available, I’ll link to the film’s website, the director’s Meet the Artist Sundance video profile and to his Indiewire filmmaker interview. For screening dates and times at Sundance, click the link in the first paragraph.