In Theatres: THE NEW BLACK 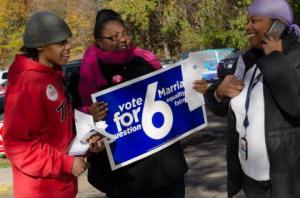 I covered the doc out of AFI Docs in Indiewire this past Summer, noting:
Yoruba Richen’s new film is a candid, and often eye-opening, look at the complex truth behind the idea that “Gay is the New Black” when it comes to equal rights. The doc uses the 2012 marriage equality fight in Maryland to explore the contributing influence of religion on homophobia in the African-American community, at the same time examining the rhetorical linking of the Civil Rights movement of the 1960s with the struggle for LGBT equality. Richen and her team have had a busy few weeks, debuting the doc at LAFF, bringing it home to NYC for the Human Rights Watch Film Festival, and on to AFI Docs, close to the film’s Maryland setting. With the winds shifting on same-sex marriage, this topical film will be making the fest rounds for the next several months.