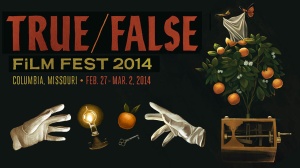 One of my favorite film events of the year, the True/False Film Festival, begins its second decade tomorrow, with its eleventh edition running through the weekend. Just over forty features plus several shorts will screen for the fest’s loyal local Columbia MO audience, as well as the scores of visitors that flock to the event each year. A festival with a distinctive vision, an appreciation for cinematic non-fiction, the organizers also have cultivated a unique approach to the event itself, peppering it with beloved traditions, like the March March Parade, eclectic screening venues, and fun parties. This year, they’ve decided to shake things up even further, revealing several weeks ago that they will be sharing revenue with their featured filmmakers. I’m always excited to head out to the festival, which carefully curates a program of new and recent work, cherry-picking from among the best of Sundance, IDFA, and other events, while offering some secret sneak previews, and, this year notably, a number of world premieres – though they don’t make a big deal about the latter. The following highlights these as well as other works I haven’t already mentioned here before.

Debuting at the fest are: Robert Greene’s evocative, complex, and always intriguing new film, ACTRESS (pictured), following an actress in her attempt to restart her career following a break to start a family; Amanda Rose Wilder’s APPROACHING THE ELEPHANT, an up-close look at the microcosmic world of a brand new free school in New Jersey; Ryan Murdock’s BRONX OBAMA, about a man whose resemblance to the US President unexpectedly created opportunities he never anticipated; Joe Callander’s LIFE AFTER DEATH, a satiric exploration of philanthropy in Rwanda; and Jessica Oreck’s THE VANQUISHING OF THE WITCH BABA YAGA, a meditation on Eastern Europe, framed by the legend of the titular child-eating forest creature.

Other features screening that haven’t been noted before here include: Jodie Mack’s DUSTY STACKS OF MOM (pictured), a chronicle of the dismantling of the filmmaker’s mother’s memorabilia business, made obsolete in the Internet age; Daniel Vernon’s MIRACULOUS TALES, about Northern Ireland folk remedies and those who practice them; and, screening as a work-in-progress, Anna Sandilands and Ewan McNicol’s UNCERTAIN, a Southern Gothic study of a Texan town.

Also notable is the return of the fest’s Neither/Nor series, presented by AMPAS, an exploration of works that border fiction and nonfiction. This year’s focus is the self-reflexive cinema of Iran, as represented by Abbas Kiarostami’s CLOSE-UP, Mohsen Makhmalbaf’s A MOMENT OF INNOCENCE, Jafar Panahi’s THE MIRROR, and Samira Makhmalbaf’s THE APPLE (pictured).