SXSW kicks off tomorrow, Friday, March 7, and runs through Sunday, March 16. Between attending True/False (post to come) and working on programming Nantucket, I have been remiss in highlighting this year’s documentary line-up in any depth. As I’ve noted before, my annual pilgrimage to Austin feels like a rite of Spring, a week of typically warm weather that preps me for the eventual thawing out of a NYC seemingly caught in an endless polar vortex. While I’ll be checking out as many of the offerings, fiction and nonfiction alike, for Nantucket, my heart remains with the latter, so I’m especially interested in the fifty feature docs that are included in this year’s lineup. Selections from each section are highlighted below. 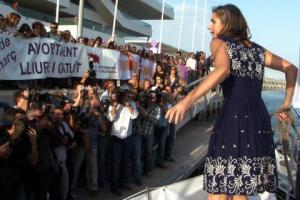 The eight titles making their world premiere as part of the Documentary Feature Competition have already beaten out nearly 900 other contenders, so they’re all on my list – but particular highlights include: Margaret Brown’s Deepwater Horizon investigation, THE GREAT INVISIBLE; Diana Whitten’s maritime abortion activism profile, VESSEL (pictured); Cat Gund’s portrait of an extreme action choreographer, BORN TO FLY; Aaron I. Naar’s chronicle of “America’s first white mariachi,” MATEO, as he visits Cuba; and Jason Sussberg and David Alvarado’s meditation on eternal youth, THE IMMORTALISTS.

Another dozen nonfiction entries claim SXSW slots in the Documentary Spotlight section. Among these are: Sandy McLeod’s SEEDS OF TIME, about the quest to preserve seed diversity for the future; Elijah Drenner’s THAT GUY DICK MILLER, a portrait of the titular character actor; Angus Macqueen and Guillermo Galdos’ THE LEGEND OF SHORTY, the search for a notorious drug cartel head; Sandrine Orabona and Mark Herzog’s LADY VALOR: THE KRISTIN BECK STORY, on an MTF former Navy Seal; Travis Rummel and Ben Knight’s DAMNATION (pictured), a look at the impact of dams on America’s river systems; and Cary Bell’s BUTTERFLY GIRL, a coming of age portrait of a teenager with a life-threatening illness.

Seven docs appear in the festival’s Visions section, meant to highlight cinematic risk-takers, including: Charlie Lyne’s love letter to teen movies, BEYOND CLUELESS; Iva Radivojevic’s poetic meditation on migration and belonging, EVAPORATING BORDERS; Darius Clark Monroe’s personal reckoning with the crime that sent him to prison as a teenager, EVOLUTION OF A CRIMINAL; and Jon Matthews’ portrait of a West Virginia family’s struggles, SURVIVING CLIFFSIDE (pictured).

SXSW shows its music roots through the docs of the 24 Beats Per Second section. As ever, I have a fraught relationship with music docs, but am intrigued by: Alex Steyermark’s THE 78 PROJECT MOVIE, which brings together 1930s recording equipment with modern day musicians; Doris Dörrie’s QUE CARAMBA ES LA VIDA, a portrait of female mariachi in a macho culture; Beth Harrington’s THE WINDING STREAM (pictured), about the legendary linked music families of the Carters and the Cashes; and Martin Shore’s TAKE ME TO THE RIVER, a look back at Memphis’ Stax Records.

Finally, non-fiction offerings also appear in SX Global, including Carlo Zoratti’s THE SPECIAL NEED and Kitty Green’s UKRAINE IS NOT A BROTHEL; Special Events, where I’m most interested in Keva Rosenfeld’s ALL AMERICAN HIGH: REVISITED (pictured); and Festival Favorites, offering up a selection of films from Sundance and Toronto already covered here, such as Ben Cotner and Ryan White’s THE CASE AGAINST 8.

One response to “SXSW 2014: Documentary Overview”