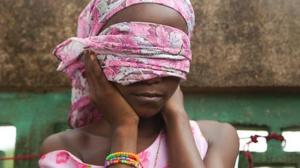 Jessica Vale’s look at a disturbing case of child rape in Liberia had its world premiere at Palm Beach last year. It went on to screen at Dallas, Bronze Lens, Encounters, Warsaw, Baghdad, Toronto Black, LA Pan African, and Egypt’s Luxor fest, among others.

At the start of Vale’s film, Olivia, a nine-year-old, is brought in for medical treatment in a Monrovian hospital, suffering from malnourishment and a debilitating fistula. Her mother believed her condition to be caused by witchcraft, and kept her homebound for two years, but medical professionals soon determine that the cause is a horrific rape – by Olivia’s own cousin, when the girl was just seven-years-old. Sadly, the film reveals that child rape is no rare crime in Liberia. What’s worse, victims are often ostracized, made to suffer twice over as their community shuns them for causing trouble, as happens here. As Vale follows Olivia and her mother to their sad end, as they face obstacles in their search for justice, she lays out a compelling analysis about how Liberia’s violent past of civil war and child soldiers has led to a culture that tacitly condones rape. While Olivia’s story is moving (and has since inspired a scholarship to be founded in her name), Vale’s well-intentioned film is too conventional in approach, often unfocused, and unfortunately plagued with an overuse of narration and a corresponding tendency to speak for her subjects rather than allowing them to speak for themselves, ultimately making the doc less effective than it could have been.