In the Works: WELCOME TO LEITH 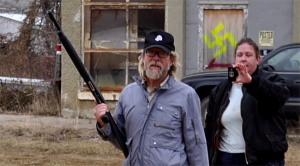 With no more than two dozen inhabitants, rural Leith ND drew the attention of Craig Cobb, a notorious white supremacist who had relocated to the state due to the recent oil boom, because of the availability of land. Purchasing several plots, he later expressed his intent: to draw other white supremacists to the town and take over its governance, a goal met with resistance by the long-time residents. Filmmakers Michael Beach Nichols and Christopher Walker chronicle the standoff, as the two opposed small communities try to lay claim to their self-determination with the help of their supporters.

The filmmakers have just under three weeks left in their Kickstarter campaign for $60,000 in post-production funds. To stay updated on the project, check out the doc’s Facebook page.

Leith’s recent stranger than fiction history speaks to American ideals of life, liberty, and the pursuit of happiness – most provocatively, on both sides of the conflict. The town’s relative desolation and Midwestern setting paradoxically suggests both a sense of inconsequence and import – while Cobb’s plan may have only had an impact on a small number of people, it might have been the testing ground for expansion to other small towns and beyond. I’m curious to see how Nichols and Walker portray both camps, and what lasting effects the controversy has had on the town.

Note: If you have a feature documentary currently in production or post-production and would like to be considered for an In the Works profile, tell me about it here.

Filed under Documentary, Film, In the Works