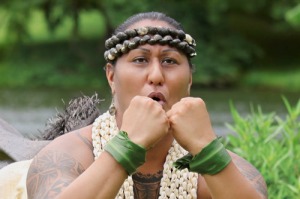 Hamer and Wilson’s film follows the interconnected, parallel stories of Hina Wong-Kalu, who teaches traditional Hawaiian culture at a Honolulu school, and her student, Ho’onani, a sixth grade girl who is drawn to the boys’ hula troupe. Championing the Hawaiian conception of mahu – the coexistence of male and female spirit – Hina encourages Ho’onani’s pursuit, and her trust is borne out as the tomboy quickly emerges as a leader of the group. Outside of the school setting, Hina contends with relationship issues, as her younger Tongan husband exasperates her with his drinking and jealousy, while she also tries to balance her work to preserve traditional Hawaiian culture, investigating the disturbance of local burial sites. The filmmakers adroitly capture a strong yet vulnerable woman in a well-rounded manner too often missing from many profiles of transgender individuals that only focus on a singular aspect of their identity.