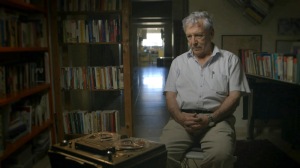 On June 5, 1967, the armies of Egypt, Syria, and Jordan amass on Israel’s borders, threatening annihilation. Six days later, the war ends with Israel’s decisive victory – conquests of Gaza, Sinai, and the West Bank, tripling the tiny country’s size. Streets brim with joy, but behind the euphoria and a proud new national narrative of invincibility are other voices.

One week after the war, author Amos Oz audio-records intimate conversations with Israeli soldiers fresh from the battlefield. These provocative tapes, censored until now, are the core of a startling film about the tragic paradox of Zionism and the contradictions that arise when a people seeking freedom turn occupier, when David becomes Goliath.

The soldiers’ harrowing confessions, combined with rare archival footage and evocative sound design, create a sense of stunning immediacy. As they wrestle with the systemic excision of Palestinians, the dehumanizing nature of war, and echoes of the Holocaust, we listen as these men, now almost 50 years older, hear the recordings for the first time, and the past erupts, presciently, into the present.

Some Background:
Director Mor Loushy’s first documentary, ISRAEL LTD, debuted at IDFA. She counts among her producers Sundance alums Hilla Medalia and Neta Zwebner, WEB JUNKIE (2014), as well as Daniel Sivan, their recent partner on the Cannes-debuting doc, THE GO-GO BOYS: THE INSIDE STORY OF CANNON FILMS, who also edited this project. Impact Partners’ Jenny Raskin is one of the film’s co-producers; she also executive produced fellow 2015 World Cinema Documentary Competition title CHUCK NORRIS VS COMMUNISM and WEB JUNKIE. They are joined by WEB JUNKIE’s other executive producers in the same role here, including Impact Partners’ Dan Cogan, whose other 2015 titles include SEMBENE!, THE HUNTING GROUND, HOW TO CHANGE THE WORLD, DREAMCATCHER, and CHUCK NORRIS VS COMMUNISM, as well as last year’s WATCHERS OF THE SKY; and Warrior Poets’ Morgan Spurlock and Jeremy Chilnick, who also brought the short YOU DON’T KNOW JACK to Sundance last year.

Why You Should Watch:
As evidenced by their nearly five-decade long suppression, there’s stark power in the soldiers’ words – sobering, immediate considerations of the price of war and surprisingly perceptive predictions of the direction the suddenly empowered state of Israel would take in the coming years. Oz’s recordings, combined with carefully selected period footage by Loushy, reconstruct a nation at a crossroads, making the audience wonder what impact they may have had if they had been released unexpurgated in 1967.

More Info:
For more information, visit the film’s website and Facebook page. Check out Loushy’s Indiewire filmmaker interview. For screening dates and times at Sundance, click the link in the first paragraph.