Frameline, the longest running LGBT film festival in the world, opens in San Francisco tonight, Thursday, June 18, and will present over 70 new features before it wraps up during SF Pride weekend on Sunday, June 28. More than 30 new and recent documentary features will screen, including Centerpiece film OUT TO WIN, Malcolm Ingram’s focus on professional LGBT athletes; and Showcase programs like FROM THIS DAY FORWARD, Sharon Shattuck’s personal reflection on her transgender dad. Highlights from the fest’s nonfiction programming is highlighted below:

Other docs exploring the lives of trans subjects include: Hillevi Loven’s DEEP RUN (pictured), which follows a young transman as he navigates love and religion in a small Southern community; Michiel Thomas’ GAME FACE, a profile of out athletes, including professional MMA fighter Fallon Fox; Cary Cronenwett’s PEACE OF MIND, about a trans artist who perished in the Haiti earthquake of 2010.

Nonfiction programming focused on the lesbian experience includes: Nneka Onuorah’s look at African American lesbian identity, THE SAME DIFFERENCE (pictured); Barbara Hammer’s WELCOME TO THIS HOUSE, A FILM ABOUT ELIZABETH BISHOP, a consideration of the love life of the noted poet; and Michelle Boyaner’s PACKED IN A TRUNK: THE LOST ART OF EDITH LAKE WILKINSON, which follows acclaimed filmmaker Jane Anderson as she explores the life and art of her lesbian great-aunt. 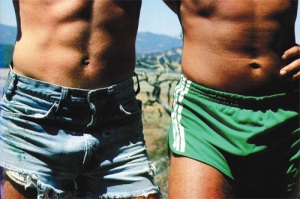