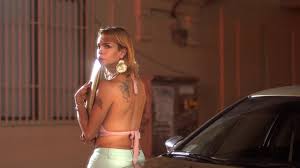 Sickles and Santini turn their attention to an excessive nine subjects, creating a survey which is ultimately bogged down by its surfeit of characters and a lack of focus. Despite most media touting the doc as a look at the Puerto Rican trans community, the film actually includes three non-trans-identifying drag queens, four self-identified MTF (one not even Puerto Rican), one woman who refuses the trans label, preferring gender dysphoric instead, and one token FTM who, while sympathetic, barely appears. This strange conflation of trans and drag is significant insofar as one major thread involves the efforts of the trans subjects to mobilize their community to support an anti-discrimination law – it’s telling that those who participate in the Butterflies Trans Foundation are not drag queens, but the other trans-identified characters. While characters like the gender-dysphoric Soraya, or Samantha, whose transition has been temporarily halted, at least afford an opportunity to consider questions around gender, age, and the body, the inclusion of the forgettable drag queen characters feels extraneous, or worse, an excuse to include footage of lip-sync performances to try to spice up the proceedings. Beyond being ill-fitting, it’s a shame, as two of the trans subjects are compelling enough to carry the film all by themselves: Ivana, a self-possessed spokeswoman for the community, and Sandy, a sex worker who’d love to be able to support herself with more traditional employment.