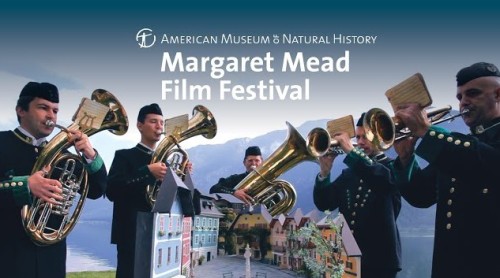 The American Museum of Natural History’s Margaret Mead Film Festival celebrates its 39th year of showcasing primarily ethnographic nonfiction for NYC audiences. The event kicks off tomorrow, Thursday, October 22 with Susan Gray and Linda Matchan’s portrait of the collaboration between indigenous Canadian and Guinean circuses, CIRCUS WITHOUT BORDERS; and closes on Sunday, October 25 with Daphne McWilliams’ consideration of the impact of absent fathers, IN A PERFECT WORLD…. These join nearly 30 other features, plus shorts and other programming, that make up this year’s lineup. Additional feature highlights are noted below:

Films focused on the Americas include: Chris Boebel and Christine Walley’s EXIT ZERO, a look at a post-industrial region of Chicago; and Georgina Barreiro’s ICAROS, a journey into the Amazon and indigenous peoples’ relation to ayahuasca. European stories include: Aldona Watts’ LAND OF SONGS (pictured), about a group of women who have maintained Lithuanian folk song traditions; Lucile Chaufour’s EAST PUNK MEMORIES, an immersion into the 1980s Hungarian punk scene; and Benjamin Kahlmeyer’s THE INVISIBLES, a look at the transitional experience of asylum seekers in Germany.

Moving over to Africa, Mead offers Kristof Bilsen’s ELEPHANT’S DREAM, a lyrical look at civil servants in a Congo struggling to maintain its infrastructure; while the Middle East is represented by Amin Palangi’s LOVE MARRIAGE IN KABUL, in which a surrogate mother tries to mediate a complicated dowry; and Asian stories include Elisa Paloschi’s DRIVING WITH SELVI (pictured), about an Indian woman who finds liberation through a taxi license. Finally, Oceania topics include Sarah Grohnert’s observational study of indigenous efforts to crate sustainable buildings, EVER THE LAND; and Darlene Johnson’s history of an Aboriginal political theatre company, THE REDFERN STORY.