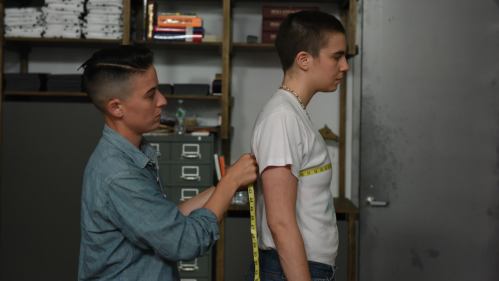 SUITED follows its subjects – clients seeking a personalized experience – into the minimalist office space of Bindle & Keep, a bespoke tailoring company based in Brooklyn that caters to a diverse LGBTQ community and looks beyond the gender binary. Clothier duo Rae and Daniel take a holistic approach to their work, considering each client’s personal narrative, which becomes inextricable from the creation of the perfect custom-made suit. From Derek’s emotional journey as he prepares for his wedding to Everett, a law student in a conservative environment, or Mel, who simply wants to look good for their 40th birthday party – the need for well-fitting garments represents deeper meaning around identity, empowerment, and feeling good.

Going deeper than fine fabrics and silk linings, SUITED takes a modern, evolved look at gender through the conduit of clothing and elucidates the private and emotional experience surrounding it. With heart and optimism, the film documents a cultural shift that is creating a new demand – and response – for each person’s right to go out into the world with confidence.

In addition to producing fellow 2016 title THE EAGLE HUNTRESS, Reiss previously produced short alums IT’S ME HILARY and I KNEW IT WAS YOU (2009).

Why You Should Watch:
Demonstrating just how important one’s public persona can be to self-esteem, Benjamin’s survey of Bindle & Keep’s work and philosophy proves eye-opening. The tailoring duo’s desire to make their clientele just feel good in their own clothes – and, by extension, in their own bodies – comes through in warm profiles that showcase how something that most people take for granted – clothing – can have the most unexpected impact.