2016 Sundance Docs in Focus: MAYA ANGELOU: AND STILL I RISE 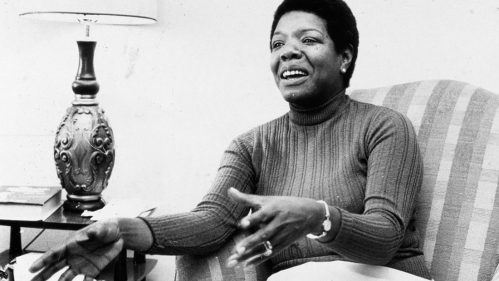 Continuing my look at this year’s Sundance docs: MAYA ANGELOU: AND STILL I RISE, Bob Hercules and Rita Coburn Whack’s celebration of the acclaimed poet.

Distinctly referred to as “a redwood tree, with deep deep roots in American culture,” icon Maya Angelou gives people the freedom to think about their history in a way they never had before. Dr Angelou’s was a prolific life; as a singer, dancer, activist, poet, and writer she inspired generations with lyrical modern African American thought that pushed boundaries.

Bob Hercules and Rita Coburn Whack’s unprecedented film celebrates Dr Maya Angelou by weaving her words with rare and intimate archival photographs and videos, which paint hidden moments of her exuberant life during some of America’s most defining civil rights moments. From her upbringing in the Depression-era South to her swinging soirees with Malcolm X in Ghana to her inaugural speech for President Bill Clinton, we are given special access to interviews with Dr Angelou, whose indelible charm and quick wit make it easy to love her.

Skillfully crafted with heart and ease, this film reflects the vibrant spirit of an American legend who was determined to live her philosophies and fought for what she believed in her whole life.

Coburn Whack’s long association with Dr Angelou includes producing her award-winning radio show for Oprah Radio from 2006-2010 as well as her Black History Month Specials. She has also produced three Emmy Award-winning television docs, as well as work for C-SPAN, the History Channel, and BET.

Co-Producers: Chris Gardner and Raymond Lambert
Gardner is well-known as a motivational speaker, author, and philanthropist. His best-selling memoir recounting his struggle with homelessness, THE PURSUIT OF HAPPYNESS, was adapted into the Will Smith-starring film of the same name. Lambert is an entrepreneur and comedy club founder. His previous producing credits include the documentary PHUNNY BUSINESS and the drama SLOW BURN (Toronto).

Glass was formerly a Creative Director at Hallmark, where she worked with Dr Angelou on a number of specials and series. She also made possible Dr Angelou’s participation in BET’s documentary special, SOUL MATES: DR MAYA ANGELOU AND COMMON.

Kantor is the executive producer for PBS’ American Masters, and serves in the same role for 2016 Sundance Day One doc NORMAN LEAR: JUST ANOTHER VERSION OF YOU. Prior to this role, he has won Emmy and Peabody Awards for his work as a director on projects for PBS, HBO, and Bravo, among others.

Philanthropist Pritzker is the founder and president of the IDP Foundation, which puts a focus on education-based initiatives.

Sarowitz is the founder and chairman of payroll and HR company Paylocity.

Lacy is the creator and former executive producer of American Masters. Her previous Sundance credits include executive producing THE EDUCATION OF GORE VIDAL (2003), ROBERT CAPA IN LOVE AND WAR (2003), COMING TO LIGHT: EDWARD S CURTIS AND THE NORTH AMERICAN INDIANS (2000), HITCHCOCK, SELZNICK AND THE END OF HOLLYWOOD (1999), LOU REED: ROCK AND ROLL HEART (1998), WALDO SALT: A SCREENWRITER’S JOURNEY (1990), and PRESTON STURGES: THE RISE AND FALL OF AN AMERICAN DREAMER (1990), as well as directing the doc feature PAUL SIMON: BORN AT THE RIGHT TIME (1993).

Scully’s philanthropy has extended to several past Sundance titles as well as to fellow 2016 films NEWTOWN, RESILIENCE, UNDER THE GUN, THE EAGLE HUNTRESS, and LOVESONG.

O’Connell is the senior producer and head of production for PBS’ ITVS. His past credits include the Sundance alum JEAN-MICHEL BASQUIAT: THE RADIANT CHILD (2010).

Sacks is series producer for American Masters. Her past credits include the Sundance alum SOUND AND FURY (2000), which went on to be nominated for the Academy Award.

Tsunashima is supervising producer for American Masters. Her past credits include the Sundance alum PATTI SMITH: DREAM OF A LIFE (2008).

Editor: David E Simpson and Lillian Benson
Simpson’s previous Sundance editing credits include LIFE ITSELF (2014) and WHEN BILLY BROKE HIS HEAD… AND OTHER TALES OF WONDER (1995), which he also directed and produced. He also cut Hercules’ BILL T JONES: A GOOD MAN and FORGIVING DR MENGELE.

Why You Should Watch:
Surprisingly, this project marks the first comprehensive portrait of the influential Dr Angelou, who passed away in 2014. Coburn Whack and Hercules affectionate tribute makes her life and work available for new audiences to discover, while offering adherents a welcome refresher.