In Theatres: REQUIEM FOR THE AMERICAN DREAM 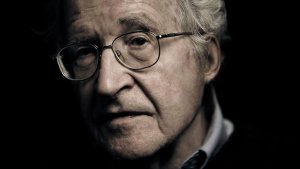 Coming to theatres next Friday, January 29: REQUIEM FOR THE AMERICAN DREAM

While the topic of inequality has been covered in several documentaries over the past decade, Hutchison, Nyks, and Scott’s essay film benefits from placing their entire focus on one man’s take: Noam Chomsky. Claiming that the four years of interviews that make up the project constitute the famed linguistics professor’s last extended participation in such projects, the filmmakers make the most of the octogenarian intellectual’s analysis, thought-provoking and far-reaching despite a relatively concise presentation. Ten chapters lay out Chomsky’s principle of the concentration of wealth and power, demonstrating how the American system of democracy has essentially been hijacked by corporate interests with the aim of maintaining a divide between the super wealthy and everyone else. Presented as an extended talking head interview, the filmmaking trio liven things up visually with striking money-themed graphics, but even in their absence, Chomsky’s measured, thoughtful delivery proves captivating. While much of what he says is, by his own admission, hardly a surprise, its assemblage and tidy organization here makes this an essential contribution to the body of work exploring modern inequality.