São Paulo and Rio de Janeiro will host the 21st edition of Brazil’s It’s All True International Documentary Film Festival, which opens tomorrow, Thursday, April 7 in the former with Berlin winner FIRE AT SEA, Gianfranco Rosi’s meditation on the refugee crisis; and in the latter on Saturday, April 9 with THE AMAZING ARTRICKS OF THE GYPSY CLOUD, Paola Vieira and Claudio Lobato’s profile of a 1970s Rio art collective. Before the festival wraps on Sunday, April 17, the event will present over forty new and recent feature docs, as well as shorts and retrospective programming.

Among the seven titles included in the Brazilian Competition for Feature and Medium-Length films are Emília Silveira’s GALLERY F (pictured), the story of a militant revolutionary sentenced to death in the 1970s; Eduardo Escorel’s IMAGES OF THE ESTADO NOVO 1937-45, an expansive consideration of a dictatorial period in Brazil’s history; and Walter Carvalho’s KEEP THE RIDGELINE, NOT THE FAINTING PLAINS, a portrait of an acclaimed national poet.

A dozen titles vie for recognition in the International Competition, including: Carola Fuentes and Rafael Valdeavellano’s CHICAGO BOYS (pictured), about the University of Chicago economists who developed Pinochet’s economic system; Alina Rudnitskaya’s CATASTROPHE, about a major dam accident in Siberia; and Andrés Di Tella’s 327 NOTEBOOKS, in which a retired Argentine professor looks back over a half century of personal journals. 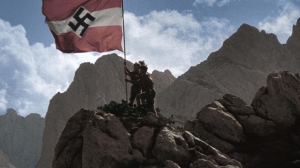 Additional programming includes non-competitive sections, including the Latin American Showcase, with titles such as Justin Webster’s GABO: THE CREATION OF GABRIEL GARCIA MARQUEZ and Jonathan Perel’s TOPONYMY, on four Argentine cities which became the homes to displaced people under the military dictatorship; The State of Things, which features Lívia Perez’s LAMPIÃO DA ESQUINA, LIGHTING UP BRAZILIAN PRESS, about a pioneering Brazilian gay newspaper, and Samir Anujamra and Tito Gonzalez Garcia’s THE DESERT OF THE DESERT, on the longstanding fight for self-determination by Bedouins in the Western Sahara; and a special focus on Olympic stories, including Jean-Christopere Rosé’s HITLER’S CHAMPIONS (pictured), on the Nazi athletic program, and Felipe Pena’s IF THIS TOWN WASN’T MINE, in which a Rio community speaks out against displacement caused by Olympic development.