The 19th RIDM, Montreal’s documentary festival, kicks off this Thursday, November 10 with Gianfranco Rosi’s acclaimed look at the migrant crisis, FIRE AT SEA; and runs through Sunday, November 20, when the fest comes to a close with Santiago Bertolino’s FREELANCER ON THE FRONT LINES, which follows a journalist through conflict zones over three years. This year’s event offers more then 50 new and recent feature documentaries, as well as scores of shorts, retrospective, and interactive programming. Highlights from the former are noted below. 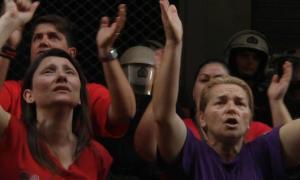 The Official Competition includes contenders for both Canadian and international work. On the features side, Canadian films include: Carlo Guillermo Proto’s RESURRECTING HASSAN, which follows a blind family as they desperately cling to hope of a reunion with their lost child; John Walker’s QUEBEC MY COUNTRY MON PAYS, a personal reflection on the language and cultural divides in Quebec; Sylvain L’Espérance’s COMBAT AU BOUT DE LA NUIT (pictured), an essay film on the crises facing Greece. 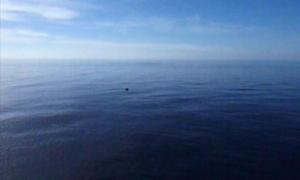 The International Feature Competition offers titles like: Philip Scheffner’s HAVARIE (pictured), an experimental study of a migrant boat; Eduardo Williams’ THE HUMAN SURGE, a hybrid exploring the disconnect between modern youth and their surroundings; and Matteo Zoppis and Alessio Rigo De Righi’s IL SOLENGO, in which old Italian hunters spin a yarn about an eccentric hermit. 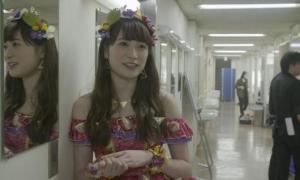 The non-competitive sections of the Panorama include: Special Presentations like Francis Legault’s LE GOÛT D’UN PAYS, about Quebecois identity and maple syrup production; and Olivier Babinet’s SWAGGER, a hybrid portrait of youth in a dangerous Parisian neighborhood; The State of the World, with Nicolas Wadimoff’s JEAN ZIEGLER, THE OPTIMISM OF WILLPOWER, following an octogenarian anti-capitalist on a trip to Cuba; Off-Limits, with Nele Wohlatz’s THE FUTURE PERFECT, a hybrid about a Chinese emigré to Argentina; Beat Dox, with Atsushi Funahashi’s RAISE YOUR ARMS AND TWIST: DOCUMENTARY OF NMB48 (pictured), a look at Japanese pop stars and their fandom; and Portraits, with Kirsten Burger, Mikko Gaestel, and Johannes Müller’s THE GREAT FORTUNE, about an obnoxious wealthy eccentric’s life; and Jero Yun’s MRS B, A NORTH KOREAN WOMAN, which follows a woman as she smuggles people out of North Korea.