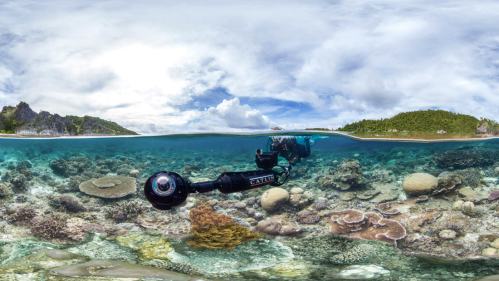 Coral reefs are the nursery for all life in the oceans, a remarkable ecosystem that sustains us. Yet with carbon emissions warming the seas, a phenomenon called “coral bleaching” – a sign of mass coral death – has been accelerating around the world, and the public has no idea of the scale or implication of the catastrophe silently raging underwater.

Enter Jeff Orlowski, director of CHASING ICE, which created irrefutable, visual proof of the melting ice caps. Orlowski’s next project is similarly evidentiary and powerful. CHASING CORAL taps into the collective will and wisdom of an ad man, a self-proclaimed coral nerd, top-notch camera designers, and renowned marine biologists as they invent the first time-lapse camera to record bleaching events as they happen. Unfortunately, the effort is anything but simple, and the team doggedly battles malfunctions technical and natural in pursuit of their golden fleece: documenting the indisputable and tragic transformation below the waves. With its breathtaking photography, nail biting suspense, and startling emotion, CHASING CORAL is a dramatic revelation that won’t have audiences sitting idle for long.

This is Orlowski’s second documentary feature, which received support from the Sundance Institute’s Documentary Film Program in 2015. In addition to its Sundance win, CHASING ICE was shortlisted for the Best Documentary Feature Oscar, nominated for the Best Original Song Oscar, and won a News and Documentary Emmy. He is the founder and director of Exposure Labs, which focuses on socially relevant projects.


Rhodes previously served as production coordinator on CHASING ICE, and serves as the director of creative development at Exposure Labs.


The Ahrens are the principals and co-founders of Argent Pictures. They executive produced Sundance US Dramatic Grand Jury and Audience Award winner THE BIRTH OF A NATION last year. Both have a background in real estate and law.

The Gruneichs are Park City residents, philanthropists, and investors with a long history with Impact Partners and Gamechanger Films. Donna Gruneich served on the Sundance Institute’s Utah Advisory Board between 2011-2015 and was its chair in 2015.

Brockman is a co-founder of OpenAI.

van Beuren produces through her Sustainable Films shingle. She is also a founder and artistic director of newportFILM.


Among Piculell’s previous credits is FRAME BY FRAME, for which she was associate producer.


The Cornfields are philanthropists and environmentalists who have previously served as executive producers on CHASING ICE.

Why You Should Watch:
As in his previous film, Orlowski’s imagery is striking, compelling, and sobering. Part of The New Climate, this year’s special environmentally-themed programming, the doc is poised to draw attention and serve as a call to action, aided by a companion VR piece in New Frontier that immerses the viewer in the coral’s ecosystem.