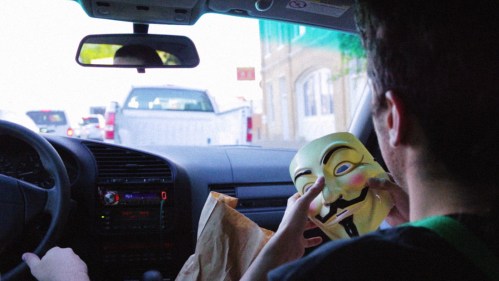 THE NEW RADICAL
Adam Bhala Lough profiles two crypto-anarchists as they face off against systems of control.

Making a printable gun landed Cody Wilson on the government’s watchlist. Together with British programmer Amir Taaki, they founded Dark Wallet, a Bitcoin app that allows its users to “go dark.” But Dark Wallet was more than an app, it was a way of expressing their ideals valuing human freedoms over controlling governments. For crypto-anarchists, ensuring freedom of information and challenging economic structures are the best way to hold truth to power. But taking on the government means you don’t always get to go home.

In this observational diptych, Adam Lough glimpses a rarified world, filled with embittered young people born into a dreamless, corporatized, and deeply politicized generation, where the only real resistance is at their fingertips – the internet. The new radicals revel in questioning every paradigm, from gun control to encryption, even if it means incarceration. Yet the question remains: Are they freedom fighters or criminals? This captivating encounter examines how a distinct group came about and what their existence says about the economic, cultural, and technological landscape of our post-election world.

Lough’s sixth doc is his third film to debut at Sundance; he also screened his narrative, WEAPONS, in 2007.


Rabinowitz is a veteran editor who has cut several Sundance narrative alumni features, including WEAPONS, Paul Schrader’s AFFLICTION (1998), and Jim Jarmusch’s NIGHT ON EARTH (1992), but this is his first documentary to appear at the festival. Moyer previously edited Lough’s most recent doc, MOTIVATION 2.


Why You Should Watch:
Lough presents audiences with outspoken, uncompromising, and darkly charismatic free thinkers who challenge conventional viewpoints and argue for absolute freedom, making for a thought-provoking film in this time of political and social upheaval.