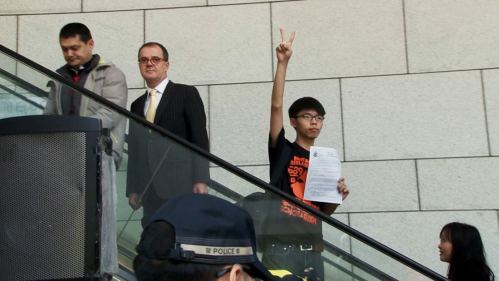 Joshua Wong is not your typical Hong Kong college student. Inside the bespectacled, unassuming teenager simmers a fierce political activist whose question for his compatriots is simple: Why should China decide our values? Armed with a political philosophy of Scholarism and enormous cojones, Wong is so deeply committed to his convictions that he’s willing to go up against anyone, including the Chinese regime, to fight for them.

Amid the glistening cityscape, filmmaker Joe Piscatella shows us another side of Hong Kong – where a new generation, in defiance of the ghosts of Tiananmen Square, has asserted its identity against the mood of disillusionment that ignited mass protests in 2014. A powerful, charismatic spokesperson, Joshua comes of age on screen as he rallies tens of thousands to civil disobedience as part of a 79-day campaign to shut down Hong Kong’s financial district. Determined not to “dump this problem on the next generation,” Joshua risks it all and doubles down as the crackdown intensifies, becoming the face of a movement in the process.

Piscatella’s sophomore feature marks his Sundance debut, and continues to explore similar thematic territory as his first doc, #CHICAGOGIRL: THE SOCIAL NETWORK TAKES ON A DICTATOR.

Torne previously directed the documentary LESSONS IN DISSENT, which profiled Joshua Wong and his former classmate and fellow activist Ma Jai, and debuted at the Hong Kong International Film Festival in 2014.


Saks exited her role as ICM agent to become CEO of June Pictures, and as such also produced this year’s FUN MOM DINNER and THOROUGHBRED.