Tomorrow, Thursday, February 16, kicks off the 16th edition of Documentary Fortnight, MoMA’s annual showcase of nonfiction, with Rahul Jain’s Sundance award-winner MACHINES, an observational portrait of Indian factory workers. More than a dozen other recent features will screen before the event wraps on Sunday, February 26, in addition to retrospective work and shorts.

Among the world premieres are Lynne Sachs’ TIP OF MY TONGUE, which gathers a group of friends to reflect on the past fifty years; Lee Breuer’s THE BOOK OF CLARENCE, on one of the founders of the music group The Blind Boys of Alabama; Abigail Child’s ACTS & INTERMISSIONS, an experimental portrait of Emma Goldman; and Sam Wainwright Douglas’s THROUGH THE REPELLENT FENCE: A LAND ART FILM (pictured), about an art installation on the US/Mexico border. 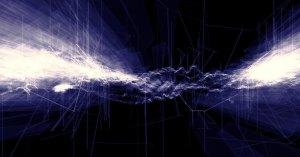 Manuel Abramovich’s SOLAR, about the complicated story behind a messianic Argentine bestseller; and Paul Kaiser, Marc Downie, Ken Jacobs, and Flo Jacobs’ ULYSSES IN THE SUBWAY (pictured), which transforms the sounds of a NYC subway ride into a 3D rendering, both make their North American debuts. NYC premieres include Shahrbanoo Sadat’s hybrid WOLF AND SHEEP, on an Afghan shepherd community; and Jiu-liang Wang’s Sundance alum PLASTIC CHINA, a look at lives intersecting in a Chinese recycling factory.