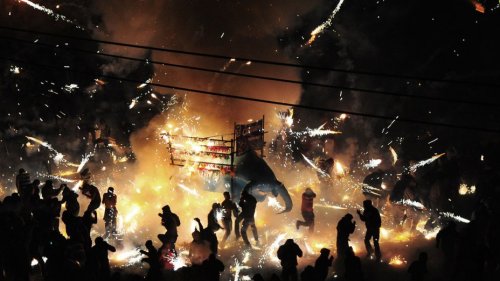 About:
An immersion into Tultepec, a Mexican city known for its pyrotechnic festival.

Over the past 150 years, Tultepec’s industry has concentrated on fireworks, and the small city creates the bulk of the country’s supply. The community holds an annual week-long celebration of San Juan de Dios, a patron saint said to have saved people from a fire without being burned. Local townsfolk aren’t always so blessed, with fireworks accidents frequently claiming body parts, if not lives. Jakovleski loosely profiling some residents, including an adolescent boy demonstrating the parallel reverence and fear engendered by the explosives, and some of the designers behind the traditional centerpiece displays of the festivities, the Castle of Fire and the Burning of the Bulls, but the true focus and joy of the film is providing a visceral experience of the event. The filmmaker’s camera takes the viewer through explosions of light and sound, making an indelible, spectacular impression.