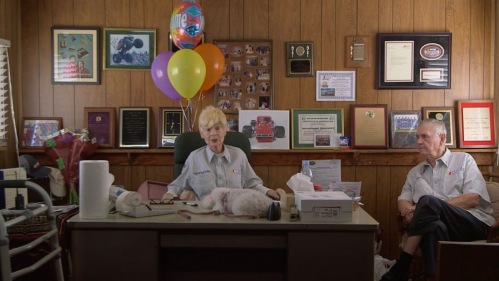 Riverhead Raceway is a rare beast. For decades it has hosted showdowns between local residents who bring their MAD MAX-inspired stock cars to do battle on a quarter-mile track, passions spilling out of the cockpit when the checkered flag drops. Forty such tracks used to exist on Long Island alone. Today Riverhead is the last. Acclaimed photographer Michael Dweck’s evocative portraiture turns the raceway into a theater of catharsis while the track’s owners struggle to maintain an American tradition as a real estate boom surrounds them.

Dweck’s stirring imagery takes you inside a race and eye to eye with the cars’ snarling grills and white roll bars that protrude like bones out of scarred metal. Yet a patient camera lets us know the drivers as everyday people and learn that Riverhead is tied to a deep sense of identity. The track is on the only piece of undeveloped land in the area – it’s worth millions – and the only thing keeping the bulldozers at bay is track owners Barbara and Jim Cromarty’s love of the track and its community.

This marks the feature directorial debut of the visual artist, known for his photographic projects centered on communities and locales, such as THE END: MONTAUK, NY, about the surfing subculture in a traditional fishing village at the end of his native Long Island; and HABANA LIBRE, a privileged look at the secret lives of Cuba’s underground intelligentsia.

This is Kershaw’s first Sundance credit. He has a background working for Oscar-nominated filmmaker Geoffrey O’Connor (AT THE EDGE OF CONQUEST), who shares an interest in documenting subcultures, and as a cinematographer, a role he also plays for this project.

This is also the first Sundance credit for Dweck, a former exec at Goldman Sachs and avid photography collector.

Howard Schultz is the executive chairman and former CEO of Starbucks. His wife Sheri and he cofounded the Schultz Family Foundation to combat the inequality of opportunity, supporting innovative programs to remove barriers to success. This is the couple’s first project at Sundance.

Luppi, who is also Dweck’s wife, serves as the studio director and handles business development for Michael Dweck Studio. This is also her first film credit.

This is Bengtsen’s first Sundance project. Among her past editing credits is the Oscar-nominated THE ACT OF KILLING.

Why You Should Watch:
Dweck pairs an experiential immersion into the subculture of stock car racing with a broader contextualization of the changing fortunes and interests of the local area, using sound and camerawork to deftly balance both a sense of gravitas and an easy familiarity to his portrait.