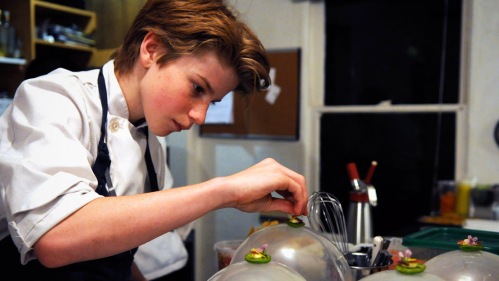 Courtesy of Sundance Institute | photo by Will McGarry

While many of young Flynn McGarry’s peers were playing video games, he was creating remarkable gastronomic delights far beyond his years at his home in Studio City, California. Flynn’s family encouraged him to pursue his creative passion, and his unique journey was thoroughly documented by his artist mother. He loved to prepare elaborate dinners for friends and family and soon became known as the “Teen Chef,” establishing his own supper club at age 12 and being featured in a New York Times Magazine cover story at age 15. Before he was 16, he had staged in top restaurants in Los Angeles, New York, and Europe. Trying to stay focused on his dream, Flynn had to weather the critics who challenged his rapid ascent in the culinary world.

With access to a trove of personal archival footage and including new, intimate vérité footage, director Cameron Yates creates a collage of Flynn’s singular focus and distinctive path through childhood. CHEF FLYNN shares a rare view of a young man’s successful rise from the inside.

This is Yates’ sophomore doc feature following the SXSW-debuting THE CANAL STREET MADAM, on which I served as a co-producer.

Cinereach’s founder and executive director is Yates’ partner, and also serves as an executive producer for 2018 Sundance World Cinema Documentary Competition title MATANGI/MAYA/MIA as well as 2018 narratives SORRY TO BOTHER YOU and WE THE ANIMALS. He previously executive produced Sundance narratives BEACH RATS (2017) and BEASTS OF THE SOUTHERN WILD (2012). Engelhorn is a trustee of the Sundance Institute.


AN OVERSIMPLIFICATION OF HER BEAUTY (2012, assistant editor)

Among Buck’s most recent doc projects are the Tribeca-debuting MEMORIES OF A PENITENT HEART and the Oscar-shortlisted THE WITNESS.

Foote most recently cut the SXSW debut, THE WORK.

Why You Should Watch:
Yates skillfully weaves together new footage with personal video shot by McGarry’s mother, Meg, to chart the passionate chef’s rise from wunderkind to independent young man, demonstrating how the appealing Flynn silences doubters through the careful development of his delectable craft.