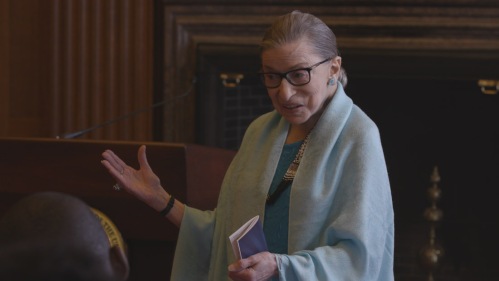 I ask no favors for my sex. … All I ask of our brethren is that they will take their feet from off our necks.
—Sarah Moore Grimké, activist for women’s suffrage, 1837

Now 84, and still inspired by the lawyers who defended free speech during the Red Scare, Ginsburg refuses to relinquish her passionate duty, steadily fighting for equal rights for all citizens under the law. Through intimate interviews and unprecedented access to Ginsburg’s life outside the court, RBG tells the electric story of Ginsburg’s consuming love affairs with both the Constitution and her beloved husband Marty – and of a life’s work that led her to become an icon of justice in the highest court in the land.

The multiple Emmy and duPont-Columbia Award-winning West has extensive experience as a producer at ABC News and CBS News, working on NIGHTLINE, 60 MINUTES, and 48 HOURS. More recent producing credits include EPIX’s THE 4%: FILM’S GENDER PROBLEM and PBS/AOL’s MAKERS: WOMEN WHO MAKE AMERICA. This is her first Sundance credit.

BetterThanFiction’s Cohen also comes from a television background, having produced for DATELINE NBC before directing and producing her own documentary short and feature projects which have shown on PBS and at festivals. This also marks her Sundance debut.

Natour is part of Cohen’s BetterThanFiction shingle and edited and cut the latter’s most recent documentary feature, AMERICAN VETERAN. This too marks her first film at Sundance.

This is Mendenhall’s first Sundance project.

Why You Should Watch:
Notably working with a production crew made up of a large percentage of women, West and Cohen have developed an empowering, engaging, and often surprisingly funny portrait of a gender-equality and cultural icon.