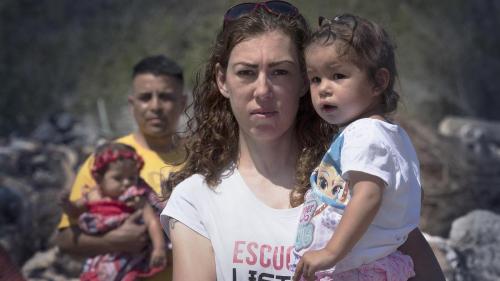 About:
A Marine Corps vet struggles to reunite her family after her husband is deported to Mexico.

Elizabeth Perez was a ten-year decorated veteran of the US Marines when she met and married her husband, Marcos, in 2009. A year later, when their first child was six months old and she was pregnant with their second, Marcos was detained after a traffic stop and deported back to Mexico. Having been previously deported and having re-entered the US illegally, Marcos was now subject to a minimum ten-year bar before he could even apply for a visa to return, regardless of his marriage to a US citizen or parentage of multiple children. As shown in Sutherland’s sobering chronicle, the entire family suffers gravely by this forced separation. While Elizabeth raises their children alone – whose number grows after Elizabeth visits Marcos in Mexico – and leads a seemingly Sisyphean campaign to bring her husband home, Marcos struggles with depression and loneliness, only able to watch his kids grow up via Skype calls and the rare in-person reunion. With Marcos urged by their lawyer not to attempt to re-enter the US via illegal means, the family tries to rally whatever support they can, partnering with a local Cleveland area Latinx organization, meeting with elected officials on both sides of the political divide, and attempting to use Elizabeth’s past military service to cut through bureaucratic red tape. As Elizabeth faces heartbreaking rejection after rejection, she must ponder giving up and relocating to Mexico with her children to live in exile with Marcos until his ban runs its course, or risk losing her marriage while Marcos misses out on his kids’ entire childhood. Sutherland’s film, while disarmingly intimate, feels epic in scope. Coming at a time of particular politicization of the issue of the US’s broken immigration system and its deleterious impact on families, the film is also notable in its resistance to easy partisanship or demonization of either side, instead using the story of the Perez family to humanize and universalize the immigration issue in the hopes of finding a better way forward.