In Theatres: FREE TRIP TO EGYPT 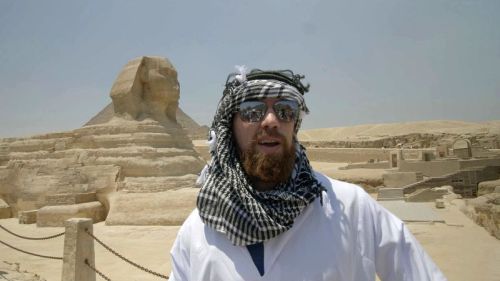 Coming to theatres across the US for one night only, tonight, Wednesday, June 12:
FREE TRIP TO EGYPT

About:
A Muslim Egyptian-Canadian seeks Americans to confront their preconceptions about the Arab world by offering them a free trip to Egypt.

In an effort to explore cross-cultural understanding during a time of severe xenophobia, Tarek Mounib, a self-described entrepreneur who grew up in Halifax, Nova Scotia, hatches a modest plan: He will bring a small group of Americans to Egypt on an all-expenses paid trip, pairing them with locals to upend stereotypes and foster one-on-one connections. Director Ingrid Serban follows him as he sets out to fulfill this goal, from searching for participants, through the trip itself, and, to a limited extent, its impact. By its nature, the film is intentionally (and somewhat annoyingly) meta in approach, with a great deal of time spent on the set up: Mounib interviewed about why he’s doing this, and followed in his frankly naive if not willfully inept initial attempts to reach potential recruits, including a visit to Trump rally in Louisville and sending an agent to NYC’s Union Square to hold up a hand-written sign. He makes for a far less compelling subject than do a couple of his eventual trip-takers, notably an older Jewish couple who have found themselves to have drifted into irrationally racist views despite a proudly liberal background. Other participants are too briefly sketched, but include a cop, a female veteran, a male Marine, and a couple of his born again Christian friends who tag along expressly to spread their love of Christ. Once in Egypt, the Americans have the expected eye-opening experience of seeing real-live Muslims, with only some brief moments of friction, which seems underplayed. Some months later, Mounib visits with the group to discuss the trip’s lasting effects, but shies away from discussing political views to instead focus on an unexpected tragedy. As a whole, Mounib’s project – and Serban’s film – is well-intentioned but simplistic, with the doc struggling with pacing and focus, making it less impactful than it appears to believe it is.