In Theatres: ANGELS ARE MADE OF LIGHT 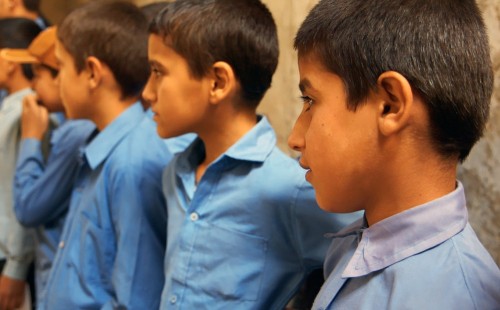 Coming to theatres today, Wednesday, July 24:
ANGELS ARE MADE OF LIGHT

About:
A look at daily life in Afghanistan, centered around a school in Kabul.

Filmed between 2011-2014, James Longley’s portrait blends footage of students and teachers at the Daqiqi Balkhi school, where instruction seems almost exclusively tied to the Koran, and in other quotidian activities, with an almost ever-present voiceover offering reflections from the participants. The focus mainly falls on three brothers who try to balance study with work in their father’s tin shop, but expands to include other students as well as adults. The latter offer the most historical context in their interviews, referencing the Afghanistan of the past and how it has changed due to British, Soviet, and Taliban influence, then, of course American occupation, played out against affecting archival footage. For the youth, their concerns largely remain apolitical, though a pivotal election has its impact late in the film. While Longley’s storytelling approach here leads to some meandering sequences, it works more than it doesn’t in revealing Afghanistan through the eyes of its ordinary citizens and children.