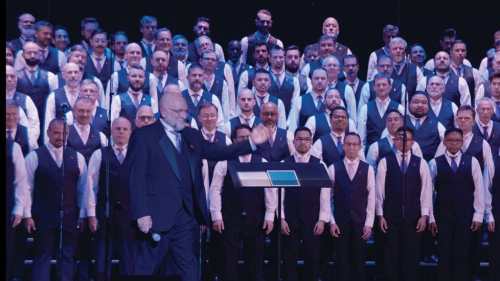 About:
The San Francisco Gay Men’s Chorus tour the Deep South to try to change hearts and minds about LGBTQ rights.

Witnessing a rise in anti-LGBTQ laws in the guise of so-called “religious freedom,” the organizers of the SF Gay Men’s Chorus form a bold plan to reach beyond their core audience and try to build bridges to communities in the very places where this legislation is most rampant. Far from simply seeking out pockets of progressive, like-minded individuals within these Southern states, the Chorus – uniting with the Oakland Interfaith Gospel Choir – make a concerted effort to have concerts in churches and to audiences who may not be quite so accepting. In addition to following their tour, director David Charles Rodrigues profiles a handful of chorus members, some of whom have connections to the South and have experienced rejection because of their sexuality. As a whole, the film skirts the overtly negative to instead offer a more hopeful, if a bit simplistic, tone, as stereotypes are confronted on both sides.