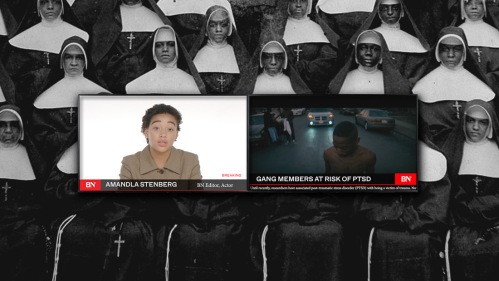 Kahlil Joseph’s mesmerizing news-creation machine is a soulful and rousing intervention into the “news-industrial complex” that is presently manifesting an epidemic in our society: news addiction powered by corporate digital platforms on networked devices. BLKNWS combines appropriated news and social media with originally produced anchored segments to create a continuously updated broadcast that is as much a news service as it is a portal to an elevated state of awareness.

“A fugitive newscast” that rejuvenates what news can be, BLKNWS aims to become a bona fide news network that can only be accessed at specific terrestrial sites. This groundbreaking exhibition will kick off at the Temple Theatre with a special extended presentation of BLKNWS and a discussion with the editors in chief. Afterwards, audiences can tune in to ambient continuous broadcasts of BLKNWS at Filmmaker Lodge, the Festival Co-op, The Box at The Ray, and other constantly proliferating sites around the Festival. It can also be seen as preshow newsreels in 11 art-house cinemas around the country.

Joseph is an artist and filmmaker based in Los Angeles, as well as the co-founder/artistic director of exhibition space The Underground Museum. He previously presented the installation DOUBLE CONSCIENCE and the short film UNTIL THE QUIET COMES at Sundance, and has collaborated with other artists, including Beyoncé (LEMONADE), Kendrick Lamar (mAAd), Arcade Fire (THE REFLEKTOR TAPES), FKA Twigs (VIDEO GIRL), and Sampha (PROCESS).

Anyanwu is a writer and user experience technologist.

Harrison is a creative director and editor. He has worked with Joseph to create the official publication for The Underground Museum, and previously the editor-in-chief of Fader magazine.

Kae is a curator, archivist, and filmmaker, as well as the former program coordinator for The Underground Museum’s Future Filmmakers Program. he currently works at Ava DuVernay’s ARRAY.

Molesworth is a curator of contemporary art, and most recently was chief curator at the Museum of Contemporary Art in Los Angeles. She has organized the first major survey of the work of Joseph’s brother, Noah Davis, since his death in 2015, which will move from David Zwirner to The Underground Museum in March.

Slade is a correspondent for VICE News Tonight, a documentary/fashion photographer, a stand-up comedian, and a former professor of philosophy.

Stenberg is an actress (THE HUNGER GAMES, THE HATE U GIVE) and outspoken intersectional feminist.

Williams is a veteran television producer and Ifa priestess.

Lynch and Rogers run Parallax Post with Joseph. Zeller and Caldwell have also previously edited work by the artist.

Why You Should Watch:
While not a traditional documentary, Kahlil Joseph combines viral videos, news stories, historical footage, and filmed segments in a video installation/newscast interrogating truth and the media. Using juxtaposition and montage in a deliberate, thought-provoking manner, Joseph provides a multi-voiced counternarrative to typical, negative portrayals of black people and culture in traditional mainstream news. The artist incubated BLKNWS at Stanford University’s Cantor Arts Center before presenting it at the Venice Biennale last year, where it gained acclaim.